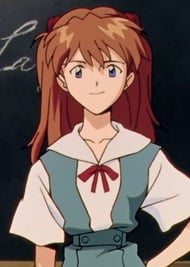 Though her mother is Japanese, Asuka's fiery red hair gives away her foreign lineage. With an American father and a childhood in Germany, Asuka is anything but typical amongst her peers, especially given her monumental ego, bossy attitude and hot-headed nature.

As Eva Unit 02's pilot, Asuka fights with aggression and defiance, preferring that Shinji and the others get out of her way rather than work together as a team.

Asuka is Shinji's childhood friend and secret admirer; she is frequently jealous of her companion's interest in the lovely Rei.

Bro when will people understand that she wasn't acting towards Shinji the way she was because she's an uwu tsundere, but instead she hates Shinji. Stop dumping down her character

Asuka is great character. She's narcissistic. Narcissists, though they seem to think they're the best, don't really feel that way. They have never been loved so they can't love themselves or others. Asuka wanted to prove to everyone that she could handle herself, although she really wanted to prove it to herself. She really felt that she wasn't enough. It's true that she sometimes acted like a bitch, but that's because she wanted to show herself that she was okay. I felt sorry for her throughout the series especially when they showed her past. She's relatable.

She's not a tsundere, she's just a bitch

I feel like Asuka is such a complex character. If the show had been more romance based, I would want her to end up with Shinji. I loved her, but hated her for the way she acted, and that she couldn't communicate with others in a nice way. She confused me with her last line in EoE, when she said you disgust me. Yes, Shinji did something terrible in the hospital scene, but she would not have been aware of that. She acted terribly towards others and tormented Shinji when he had done nothing wrong in the show. I still like her for what it's worth, but I do not agree with the way she acted. I both love and hate this character, while relating to her and seeing certain similar traits between me and her.