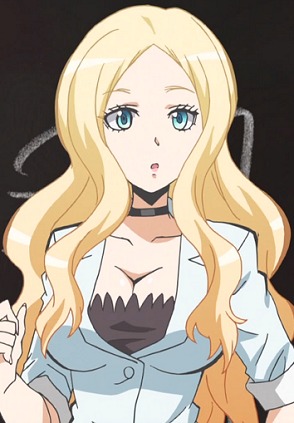 I did hate that she kissed a minor,
but other than that, you gotta love Bitch-sensei

Not really sure how to feel about her. I hate the kissing and the way she acted around the students, but she did get better.

queenie. I'm gon pretend i ain't see that kiss in the beginning of da series

Ahh professer bitch ...love her will always love her

I liked her until she became a turncoat on her employers and her charges as a teacher, but now she's earned her nickname.  Besides, I thought even professionals with respect to the context of this show, had enough integrity to abide by contracts, aka employers at least until the contract expired unless you're as egotistical as her.  Oh, and getting rejected hardly justifies such a level of treachery, not that that the romance ever looked convincing for most of the series at least.