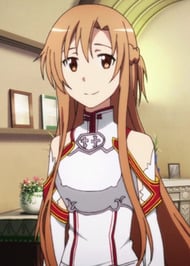 Greatly skilled with a rapier and a member of the Knights of the Blood, Asuna the Flash is one of thousands of players trapped in Sword Art Online. The girl is famous in the game for her beautiful looks, battle prowess, and long, chestnut-colored hair. Additionally, Asuna’s cooking skill is maxed out at the highest level, enabling her to prepare top-quality dishes.

Asuna normally wears a gloomy and serious expression but lightens up around the few people whose company she enjoys, like her friend Lizbeth. She repeatedly crosses paths with lone swordsman Kirito, typically when she's focused on guild duties such as clearing the latest floors of SAO’s dungeons or patrolling towns.

your taste is garbage lol

get some life kids before hating someone you shouldn't hate

fuck every dumb haters cuz Kirito is literally nothing without her I mean seriously he would be dead many times over in aincard without her and I can say this confidentally cuz I have watched SAO over and over just for her without her the show is complete garbage I mean wtf SAO = SWORD ART ONLINE aka aincard gets over in the first 14 episodes and the rest is just some made up shit to keep it going........And seriously if u watch even a bit more properly like I did U could see how much she has done for kirito comapred to the other girls in the show and in return kirito just saved her once and thats it! Where as even in recent season it is asuna that is carrying kirito like in alicization.........I mean his game was over if she wasn't ur irl bitchy gf that be like ah he is hospital lets just visit him once a day like the dumb haters gf do XD