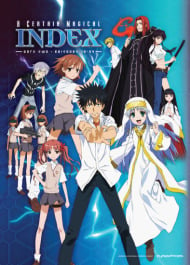 Touma Kamijou's right hand has the ability to nullify any form of supernatural power, whether it be magical, psychic, or divine; he lives in a city populated by students with these powers. Yet unfortunately for Touma, his arm also seems to nullify good luck. Despite his bad luck, the boy tries to stay out of trouble and just live out his life, trying to be the "good guy" whenever he can; but trouble enters his life one day when he finds a young girl hanging on his balcony. She turns out to be a nun of the Church of England, bearing the Index-Librorum-Prohibitorum - a collection of 103,000 forbidden texts, and as a result has a number of people after her. How far will Touma go to protect his new companion from her pursuers?

Necessarius (The Church of Necessary Evil)

StoryWhat better way to spend a snow day than wrapped up in a slanket with a mug of hot chocolate and an unhealthy marathon of anime ready to launch. Catching up on some more recent titles, I fired up To Aru Majutsu no Index with great expectations, only to be sensuously teased for 6 episodes before being dumped unceremoniously shortly after. Well, at least work is still paying me whilst doing this... Sweeping the viewer off their feet with almost instant action, there is a brief introduction to the main protagonist, Toma Kamijo, and his ongoing narration of the show. Attempting to save an innocent girl from the unwelcome advances of a group of thugs, the poor guy finds out that feisty Misaka doesn’t need any help as she is one of the strongest level 5 espers in the city. A shocking battle between the two sees an unlikely victor emerge, as the useless Kamijo discovers a previously unknown power in his right hand that completely nullifies magic. Arriving home tired and confused, a new surprise arrives on his balcony in the form of a white robed sister named Index. Inside her head are 103,000 forbidden grimoires and following close by are a society of sorcerers, determined to prise this knowledge out of her. And all of this in the first episode! As they say, all good things must come to an end, and sadly this bustling excitement burns itself out just one quarter of the way into the show. An exciting build-up and introduction to some very sexy characters soon makes way for a vaguely interesting mess that doesn’t want to choose a form or direction. What was once an exciting epic fantasy battle slips into a dull, middle-of-the-road highschool comedy, verging on harem fluff. The dynamic between Index and Kamijo remains utterly hilarious with some decidedly perverted undertones, but this is nudged aside in favour of exploring some less fascinating side characters. For a show entitled “To Aru Majutsu no Index”, the leading lady plays a surprisingly small role. Much of the show also spends its time dedicated to explaining in painful detail how both the scientific and magical worlds work. Giving an in-depth background to each bad guy and subsequent clarification of exactly how their powers work, the lengthy chronicles seem like a buzz kill to the intermittent fight scenes. There is also a feeling that business has been left unfinished as the final episode winds up; but the promise of closure in the second season, To Aru Kagaku no Railgun, is quickly stifled given the writers opted instead to focus on an unnecessary side-story. Ultimately, if the show continued in the same vein as the opening arc, it probably would have been one of the best shows to come out of 2008/09. Instead, trying hard to cater for too much of the anime community, To Aru Majutsu no Index flits restlessly between comedy, action and highschool romance. It almost feels as if the series is wringing its hands apologetically as it serves up a lukewarm dose of ecchi harem, especially after the initial promise of something so deliciously sublime.AnimationAs the years speed by, animation becomes much more accomplished, and To Aru Majutsu no Index is no exception. The impressive visuals need to be watched in HD quality to fully appreciate how beautiful and fluid the character movements are, especially during the fast paced action scenes. Bold designs make use of a rich colour palette, particularly stunning in the fantastical magic battles (the ones that really tested the power of my processor). Deft use of CGI highlights the frenetic action, sending bright shocks of electricity dancing across the screen and causing monsters to evolve out of fierce flames. All the characters, whether the loli-styled flat-chested teacher or the busty tsundere come right out of familiar wide-eyed anime tradation, but little touches show that they have their own personality loving sketched into their other features. SoundKicking off the first episode in style, a funky rock track accompanies the exciting bustle of the onscreen fantasy and repeatedly warms up the viewer as the opening for the entire series. After this pumping inception, the closing track is a veritable letdown. Once again, the genre confusion that plagued the plot rears its ugly head as a trashy ballad poured forth from my speakers. On the plus side, the voice acting is mostly excellent; Kamijo’s seiyuu perfectly portrays his tortured personality as he attempts to juggle some feisty females. Index is reduced to cutesy comic relief and instead transforms into a high pitched and frankly annoying brat – a big contrast to the remainder of the excellent cast.CharactersKamijo has a likable nature, and I instantly took a shine to his dry wit and tongue in cheek narrative that suit the jocular nature of the series. This is complimented by the child-like naivety of Index as she attempts to adapt to her somewhat bizarre situation. The comedy between the two, although decidedly ecchi in places, can be laugh out loud funny as the pair try to hide their feelings for each other. The sister chewing on poor Kamijo’s head as she doesn’t get her own way sometimes made me question how old she is supposed to be, but always through stifled giggles. If the focus of To Aru had remained on the slapstick humour, the show would have been superb. Instead, a cluster bomb of support characters means they lack any real depth for emotional attachment.OverallTo Aru Majutsu no Index, although reasonably enjoyable, is one of those shows that I’ll probably completely forget about within a week. With no real standout plot and some lacklustre generic characters, it will probably become mixed up with the superior Shakugan no Shana in my confused memory banks. To the writers: Stick with ecchi or stick with fantasy action, I don’t care which, as both were entertaining individually, but lose their punch when messily combined.

Right, it's confession time for me. If you have been reading my reviews than you may have noticed that I tend to rip the anime a new one. There is a reason for this though and it has to do with the fact that I can't turn my brain off when watching anime. I can't ignore the stupid shown in the anime and this is a problem as most anime are very stupid indeed. In this case I'm not talking about a 90 pound girl catching a multi-ton cruise missile and throwing it back. Yes, it is stupid but it is a stupid that I'll allow. It's anime. Things like this are normal here and I'm pretty much fine with it. It annoys me to be sure but I will not rant about it. So, having explained this lets rip into this anime shall we? Just a heads up: There will most probably be spoilers. The more I hate an anime the more spoilers there will be. ART: From the same people who brought us A certain scientic railgun and it shows. The same effort went into the production of this series and it looks pretty darn good. SOUND: This has the same quality as the art in that it is well taken care of. Voice actors have fun and do an excellent job of it. CHARACTERS: Main character is Toma. He considers himself a nobody and he kind of is. There is very little special about him excepts that his right hand is able to neutralize any power it touches Index is a young girl who has a very special skill. She can memorize anything that she reads. As such her head contains the knowledge of every single magical grimoire ever written.. STORY: Toma is an average student who has an esper potential of 0. In a city where people are judged on their esper level this means that he is pretty much screwed. To further complicate his life he suddenly finds a young girl outside his room. She is Index and in her head she holds the combined knowledge of 103000 forbidden magical books. Not sure what to do with her he wonders if he should give her the proper authorities but then her keepers appear. Toma quickly realizes that these people do not care for Index in the least and decides to protect her. Unfortunately he is up against powerful mages but he has an ace up his sleeve: His right hand has the power to cancel any magic it touches. RANT: I was aware of this series existence for quite some time but left it alone. Then I saw a trailer and... MISAKA! Oh, my God! Misaka from a certain scientific railgun was in it! This series was a spinoff that took place in the same universe as one of my favorite series. I immediately picked it up, started watching and hated pretty much everything I saw. It took me a while to figure out why I didn't like it. Toma is a horrible main character. The reason is that although he does try to do the right thing it is the right thing that he and he alone beliefs to be right. Everyone who disagrees gets a right hook to the face. Literally in this case. It basically boils down to this: "I'm right and I'll punch you in the face to prove it!" I really got fed up with his power as well. It is to stupid to believe that it allows him to win each and every battle he is in. I'm not talking about his power to cancel out his opponents magic. His power is limited to his right hand only and only works when touching. If the attack is launched at any other part of his body it will go through. Same with inderect attacks. Attack him directly with a blast and he will catch it with his right hand to cancel it out. Attack the ground at his feet and he'll be perforated by shrapnel. This goes through my head at every battle and every time I shake my head if he wins. Realistically there is no way this should happen. 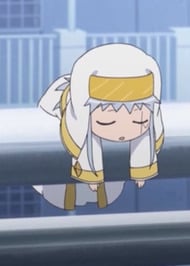 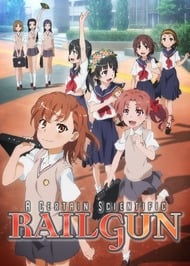 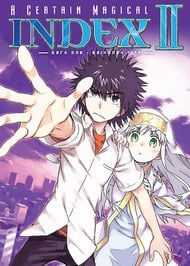 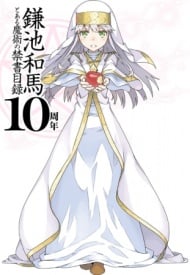 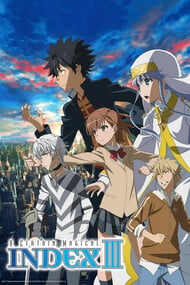 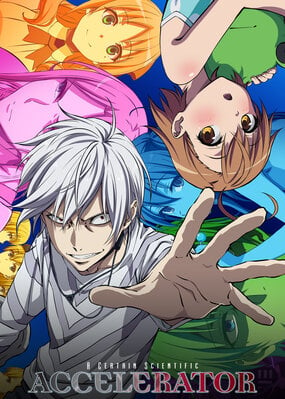 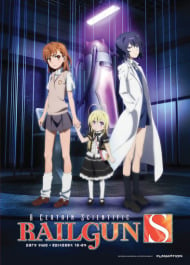 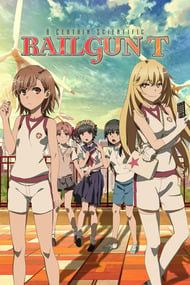 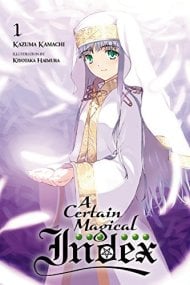 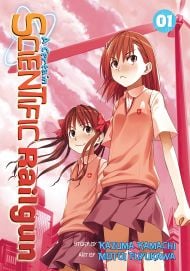 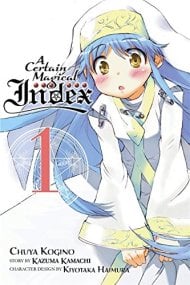 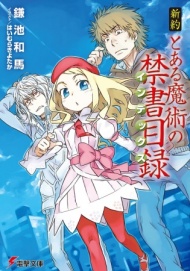 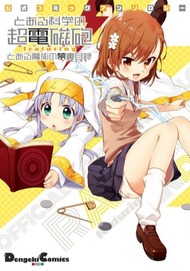 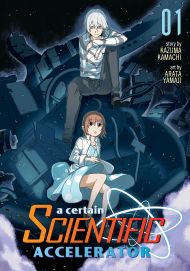 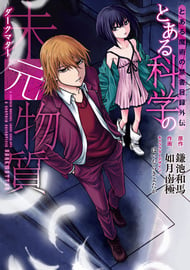