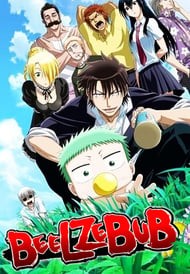 Beelzebub is a slapstick comedy around teenage delinquents and a baby which will become the demon lord when it grows up. The story is by far the weakest part as it is aimless. Nothing is going on in terms of on-going plot and all conflicts are solved easily and superficially. It gets even worse when you get a man like Takamoto Nobuhiro to direct it. His roster is nothing but a long line of pitiful titles (with the exception of Record of Lodoss War, which is rather watchable just for the kitch factor). Production values are average to good, albeit worse than the artwork in the manga version. As if the animators lack funds, lots of scenes are done very simplistic and you end up feeling half the excitement of the manga. The studio who made this is basically a branch of Pierrot Studio, where all their shonen shows have the same lazy feeling. The cast is the meat of the series and if you find them funny then nothing else matters in this review. Practically everyone is an idiot, doing idiotic things. I guess the quality of the stupidity is good if you like this sort of humor but a fatal flaw is again ruining it. You see, before the series they had made a single OVA episode that compacted the plot of all the initial missions, with far better production values. The expectations of most were too high and when the tv series began, they were disappointed with the far less amount of gags per episode, as well as the less fluent animation and the less detailed artwork. Another thing that annoyed many outside the fanbase is the baby protagonist itself. It is butt naked. Although there is not much of a problem to pass as pedophilic, at the same time the most basic question anyone would ask is “Why is it not wearing a diaper?” There is simply no excuse for that; it is naked just for us to ask the question. And no, the fact it is a demon is not an excuse because we clearly see its demonic father being fully dressed. Yet another thing that feels too weird to be funny for many is the fact that the baby is continually pissing, shitting and electrocuting people. Although that can count as a form of humor as well, scat jokes are only meant to last for a few minutes at best yet the entire series seems to be running on it. It grows easily tiresome, the plot is not going anywhere, and there is also not much context in the baby as a character. I mean, in the early Dragonball episodes, Son Goku was running around naked and doing somewhat similar jokes but there was still a story to follow and he was eventually given a backdrop. In the same manner, in the old Urusei Yatsura comedy from the 80’s Lum would constantly electrocute people but there was far more context for you to care about her, as well as the various adventures she had, which were all about some social criticism or a parody of some movie or event. Yet Beel, Oga and all the rest have no context at all. They are completely shallow and unoriginal stereotypes, doing retarded jokes that never seem to matter after the episode is over. This way you end up feeling bored fast, especially when there are many more comedies out there with far more developed casts and stories. Beelzebub is a shallow comedy, without a context in the plot or the cast for you to care. It doesn’t appear to be worthy of remembering it for anything else other than the baby’s nakedness. I highly doubt it will be remembered in a few years as a good comedy. As for the comedy part, I am not fond of scat and piss jokes at all. That is a very tasteless type of humor and nobody mature enough would stand it for more than a few episodes. So no, I don’t consider this to be a good anime, despite the few fanboys out there who find it hilarious for being retarded. 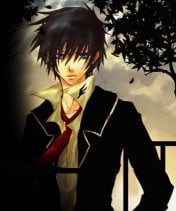 I thought it was rather stupid at first but it turned out to be really good all things considered. The last ten episodes were like filler episodes and were a bit annoying though. I was expecting more. Anyway, the fights are enjoyable, and there are a lot of fights. It's a school full of crazy delinquents which is oddly enjoyable. Well, you know they say every girl likes a bad boy or something like that. It's funny too. I got some good laughs out of it. I prefered the episodes before the school got destroyed though.  The fights and the idiotic delinquents are probably the best part of the show. It has a nice feel to it, not necessarily mature, but something like that I guess. The characters are mostly simple and don't develop much, but in this case, that's part of what makes them enjoyable.  There is some unnecessary stuff like things involving the demon world and stuff that never really gets resolved etc and there are too many "filler" episodes in my opinion. Towards the end there is like seven or eight of them, the a weak last fight and an episode of random twists. Overall, it's ending was weak, although it did conclude itself well, it could have been more exciting. The last battle was hardly a battle and after all the filler junk just wasn't as enjoyable. I wish they had actually progressed the story but I feel like the writers just got tired and did a sloppy job towards the end.  Still, I would watch it again...without the useless episodes, and I enjoyed it. At least for the first 20 or 30 episodes I was rather excited to continue watching it. I give it an eight due to the last ten episodes though. Although the categories to grade it on don't really work for me this time so they don't match the overall score. 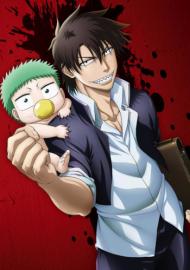 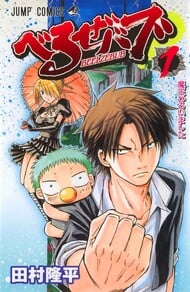 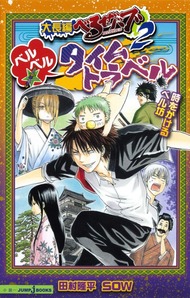 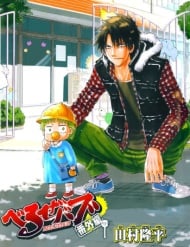 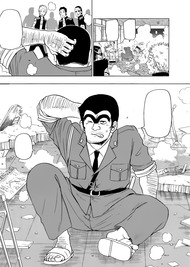