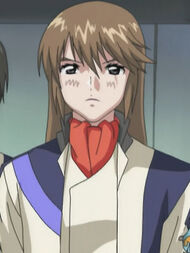 Soushi is a child of the Alvis Project. Although he can't pilot Fafners, he is a good tactician and he uses a super-computer named the Siegfried System and is also the only child in Tatsumiya Island who has seen outside world. Soushi was bred to be the next commander of Alvis, resulting in an isolated childhood while carrying the truth of the outside world. With a great love for Tatsumiya Island, his only wish is to protect it. As a socially awkward boy, Soushi is often misunderstood as heartless.