Noein: To Your Other Self 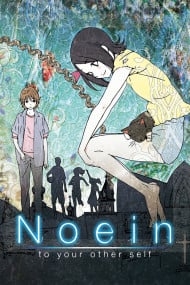 When Haruka, Yuu and their friends decided to go ghost hunting, they had no idea the "ghosts" they'd find would turn their lives upside down. Black-clad and wielding quantum powers, these knights from the future are after an artifact of immense power that they hope will save their dimension from destruction: the Dragon Torque; and Haruka seems to be the key. As factions within the knights violently disagree on how to proceed, Haruka and the gang are caught up in a fight with the Shangri La, in an existential battle where fates of entire universes are decided.

StoryFew will deny that the anime begins well. There’s a flurry of buzzwords, well-choreographed action scenes and some genuinely awesome sci-fi themes, thrown at the audience with enough precision and style to suck them right in. It’s in this I-don’t-know-what’s-going-on-but-I-don’t-really-care stage that the anime is at its best. Flash forward to midway through the show, and the story is still quite reasonable. The anime employs the parallel universe interpretation of quantum mechanics to explain its universe, and, surprisingly enough, does so in a way that is both easy to understand and somewhat believable. Although the luster of the unknown is gone, the anime is still fairly decent at holding your interest. After this, however, the show gradually declines. The biggest problem is that the storyline begins to introduce twists and turns that feel almost completely arbitrary. After a while, there is no perceivable logic in between any two connected plot points – just confusion, randomness and good deal of cheez. In other words, the story ceases to “progress” in the general sense of the term; rather, it feels almost like a half-hearted brainstorm of directions the writers could have taken if only they’d focused on any one particular idea. In the last third of the show, when all hell is breaking loose and no one (least of all the creators) really knows why, the anime completely self-destructs. In a frantic effort to tie every disjointed element into a kid-friendly, Hollywood-style ending, the story breaks any semblance of plausibility. The dialogue moves from awkward to flat out hammy, the cool quantum mechanics themes are largely replaced with absolutely nonsensical pseudo-science gibberish, and any sort of suspense that the anime might have had is lost in the face of events that are absolutely asinine. Even the action scenes start to suck. Basically, this very much reminds me of Last Exile’s general storyline. Both shows start with a very cool and fully realized world, and both have absolutely no idea what to do with it. The result is a slow downward slope that leads right up to the end, where they hit rock bottom.AnimationThe first episode tries very, very hard to have absolutely jaw-dropping visuals, and for the most part succeeds at doing so. After this, however, the animation becomes almost painfully inconsistent. There are times, most noticeably in the action scenes, where the show will look absolutely fantastic. The show has a great sense of style when it comes to contrasting the futuristic parallel world to the more mundane one where most of the story takes place. I particularly liked the character designs, which differ radically depending on which dimension they are from, but as a whole are excellent all around. On the other hand, some of what I would consider the easier scenes seem horribly askew. Character designs occasionally mesh awkwardly with the backgrounds, and simple motions like walking or talking can seem stiff and artificial. There’s also a fair bit of CGI used, and while some of it works well enough, other parts just seem horribly out of place. In particular, the show reuses the same CGI model of Haruka’s house in just about every episode, and it looks pretty bad each and every time. As a whole, the animation is still pretty good; it’s just sort of disappointing that the undeniable highs of the visuals are somewhat cancelled out by the all-too-present lows.SoundThere’s competent voice acting from the entire cast and a serviceable soundtrack that I’ve already almost forgotten. Basically, this is what I’ve come to expect from modern anime series. Nothing stands out, but par really isn’t such a bad thing when it comes to crafting music that goes well with the story.CharactersWhile most SciFi anime shows tend to have boring and undeveloped characters, Noein defies convention by having characters that are actually good. In particular, Haruka is one of the best protagonists I’ve seen in a while: smart, likeable, believable. She’s surrounded by a multitude of supporting characters, which, considering their sheer number, are all surprisingly memorable and well-developed. The only character that I wasn’t satisfied with was Yuu. He very much feels like a male version of Naruto’s Sakura, in that you’d like him if only he’d ever do something. The character’s Shinji-esque woe-is-me-I’m-so-worthless attitude just gets tedious after a while; since when is longwinded whining ever entertainment? The character gets better eventually, but at that point it’s really a case of too little, too late.OverallThe riddle: How many anime with lackluster endings must a reviewer watch before he stops expecting closure? The answer: More than I’ve seen. I really should have learned by now. It’s not just a bad habit for anime to have bad endings; it’s a time honored tradition. And yet, I fully expected Noein, a schoolkids meets quantum physics kind of science fiction, to end well. Silly me. This is really too bad, because with a nice conclusion Noein would have been an easy thumb’s up. The characters have their weaknesses, but as a whole are solid and generally likeable. Also, the storyline certainly piqued my interest, right up to the point where it started sucking. Moreover, the animation and sound could have been better, but as a whole were nothing to be ashamed of. As is, however, the lackluster ending, coupled with several other key weaknesses, makes me honestly question whether this anime is worth even a weak recommendation, let alone gushing fanboyism. Is the show worth watching, in spite of its weaknesses? I suppose. There’s enough neat ideas brought up to satisfy the SciFi itch, and, if nothing else, the characters are pretty good. Still, this kind of ambition is going to lead a lot of people to call this the best series of the year, and in that regard I’d have to strongly disagree.

I liked Noein (pronounced "no-een," by the way) quite a bit more than I thought I would on first impression.  I watched the first episode and was put off by what I saw as somewhat sketchy animation and a flimsy story.  I eventually came back to it, however, and the more I watched, the greater my appreciation for this remarkable series became. True, the animation is sketchy at times.  Especially during battle sequences, though I've yet to see battle scenes that are as kinetic and energetic as the ones in Noein.  This could definitely put some people off, like it did me initially, but stick with it; you might, also like me, become accustomed to the style, and although I do wish the animation was more consistent, it in no way detracts from the rest of the show. What we get in return for the at times shoddy animation is a real quality anime.  The characters are well-defined, if somewhat obstinately ignorant (I'll get to that in a minute), and the central characters of Haruka, Yuu, and Karasu are all fascinating in their own right, especially as the series goes on and they begin to develop and change.  Yuu especially becomes one of the most likeable characters in the series, something you might not expect from his beginnings as an annoying prick. The other characters are funny and entertaining, and get a modicum of development as well (one character especially goes through drastic changes throughout the series, but I won't say who here for fear of major spoilers).  The one downfall here is that these characters remain completely ignorant of what is going on for the majority of the series, even at times when it would make no sense for them to be; towards the end, when they're still freaking out every time something weird happens -- despite the fact that this kind of stuff has been happening for quite some time now -- it begins to border on the ridiculous.  Unfortunately, only a few characters are made privy to the real stakes of what is going on, which lessens some of the dramatic impact as the series wears on.  Still, this is a minor fault, and believable insofar as these characters are mostly children, and are being confronted with a complete breakdown of everything they've ever known. I haven't mentioned the story yet -- and that's for a very good reason: it's extremely complex, and constantly developing.  It's been said that Noein is the equivalent of "quantum physics, the series," a claim I won't refute.  I'm going to admit right here that quite a bit of what happened in this series went way over my head.  Sentences like, "if we don't hurry, our existence will become an illusion!" are thrown around pretty casually, which can make things confusing; don't worry, though -- by the time things get really complicated, you'll hopefully be invested enough to just go with it, and it all sort of makes sense anyway, no matter how many of the finer details you might miss. Despite being complex, however, the plot is highly original -- and extremely engaging.  I found myself propelled from one episode to the next, hungry to know what would happen next, even if I didn't always understand what was going on.  A mild rough patch towards the end where things seem to go around in circles for a bit didn't bother too much, though in retrospect the series probably could have been a few episodes shorter. I also want to mention that the sound design and music for this series are absolutely fantastic.  The music, for example, is the kind of sweeping, operatic stuff you might hear in a Lord of the Rings film.  Luckily, what's happening on the screen is frequently epic enough to earn that music, especially as the show enters a particularly exciting (if occasionally frustrating) finale. I've given this series a 9/10 because, despite all of its faults (and there are many), I had a great time watching it, it made me use my brain, the characters are engaging and entertaining, and the action is phenomenal.  Though there was certainly room for improvement, this is still an excellent series, and one that I heartily recommend you at least try.  I'm certainly glad I gave it a second chance.