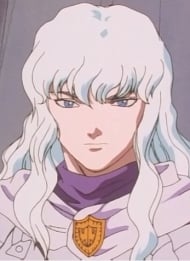 Beautiful, calculating, and cunning, Griffith is a commoner with aspirations for greatness, to reach the 'castle' of his dream. He forms the mercenary group the 'Band of the Hawks', and using his tactical prowess and strategic genius, leads the group to the upper echelons of the kingdom on his quest for ultimate power and authority. He forces Guts to join the Hawks after defeating him in a duel, and comes to rely on him more than any other.

I refuse to finish whatever is left of the manga but I can't get over his character. I liked him at the start and he seemed like a really good guy up until "THAT" all of T  H A T. From the time that the king locked him up and had him tortured from the time he was saved. He became something so much worse than I had imagined.

His character is well written and portrayed so perfectly. It's hard to hate him and or love him.

With Miura dead, Guts can't have his revenge. I really wanted to see Guts brutally and painfully murder Griffith.

If you think Griffith is an evil psychopath, congratulations, you've missed the entire point of the series. Black Swordsman has a scene where the Count summons the Godhand to try to save himself from Guts and is offered a second sacrifice as the price, and the God Hand very specifically point out that in order for a sacrifice to work at all, it has to be something you love so much it's almost part of yourself. Griffith had to care about the Band otherwise it wouldn't have worked. Griffith is shown angsting over the amount of people who die in his name, and whether his dream is worth it, using the example of the boy with the toy knight. This is all just said plainly in the text of the manga.

Like, I wouldn't say I'm super media literate but the above seemed fairly obvious to me, idk... :/

even if I excuse literally everything this mf has done, I can never forgive what he did to Casca. And by extension, Guts and Casca's relationship/child.

the people who likes this character has serious peoblems