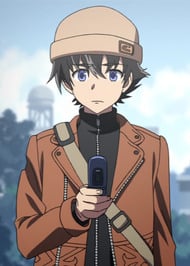 Yukiteru Amano has always been a bystander and nothing short of average. But the teen is thrust into the spotlight when Deus Ex Machina, his supposed imaginary friend, starts his survival game. Yukiteru is weak with his only means of defense being his proficient dart-throwing, though he may stand a chance at surviving the game with the aid of Yuno Gasai, his stalker. With his Random Diary, he is able to predict all the events around him, though none that concern himself.

I also need jesus too so don't attack me for that.

Overall I don't think Yukiteru is a bad character.  I don't like him but he was very realistic. He's 14 drawn into the killing game so it's no surprise that he was a bit of a ... pussy. His opponent was a terrorist, for example.

I don't understand people who love Yuno and hate Yuki at the same time. If it weren't for Yuno, he wouldn't have done any of these things. Their relationship was toxic. She tried to leave his friends for death "because he doesn't need anyone else but her". I don't know how people can see it as "true love" or something... Stockholm syndrome had a major role in this relationship.

am i weird for liking his outfit

How can people dislike him? Hes such a good character tbh