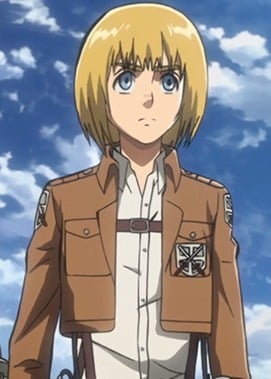 I used to hate Armin, I'm not going to lie. Mostly because I didn't understand his character and I thought he was weak and annoying. However, I was completely wrong and now he's one of my favorite characters. I love him because he was the only character who truly understood Eren, Mikasa didn't understand him and just projected her image of how Eren should be on him, or at least how she perceived him. Meanwhile, Armin understands him and is the only character who could get to him, especially when Eren was going berserk in his Titan form. They both share similar ideals and views on the world, and they both want to see the world outside of the walls. I also find his potential feelings for Annie to be endearing because I heavily ship them, and they'd be perfect together. Considering how he was visiting Annie, hinted having feelings for her before she transformed into the Female Titan, and just how he calls her a nice person and thinks of her in a positive way. Some may say he's useless, but he's one of the biggest assets to the show, even though he may be visibly weak or not outstanding, his strengths lay in his intelligence. He was even suggested as being as intelligent as Erwin, except that he lacked confidence. He's one of the most complex character in the series due to his insecurities and weaknesses, and his relationship with Eren and Armin, and possibly Annie as well. I couldn't find any weak points in his writing either.

Tbh the cowardly tag doesn't fit him, he definitaly is one of the most couragous

I second the comment below. AruAni is one of my favorite ships; they are surprisingly compatible, as they share philosophy and can fill in for each other's flaws.

On another note, I love Armin. He is the most realistic character in Attack on Titan as well as one of the most-developed.

I love him with my everything