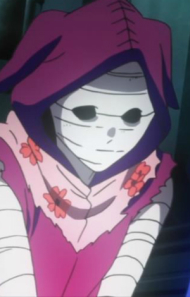 Wtf? She ain't minor at all.

Is she dead ??? cuz her status is unknown

Hate that she's the co-star of the third season, but other than that, let's go down the list: strongest character in the entire series (giant worm Kaneki excluded), a fascinating mixture of deep seated resentment and effectiveness for good, mixes multiple interesting personas (edgy demigod Eto Yoshimura, the quirky author Sen Takatsuki, face of the rebellion Eto Yoshimura, mummy Aogiri executive, the One-Eyed Owl), topped off with a mind-boggling revelation that she's had second-hand control over half the plot through Sen, Eto, and Aogiri.

I don't have a deep understanding of the manga and such, I'm no superfan, but this character made watching the last two seasons worth it. Artists should aspire to make villains as intelligent, credibly threatening, wise, surprising, dynamic, morally bilateral, and sympathetic as Eto Yoshimura.

Did it justify ordering the pop funko? Probably not. Did I? Hell yeah I did.