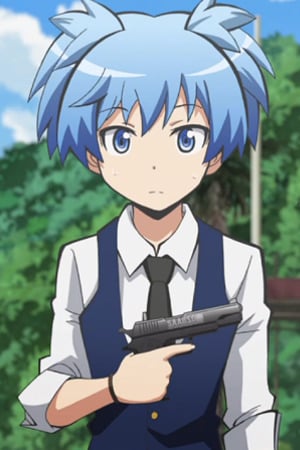 He's the first trap I've ever come across in an anime, and I like how they didn't make him just an idiot, he actually is pretty smart and observant, I like him

favorite trap, wish he got with Kaede but besides that he’s so freakin amazing

They look alike simply because most anime characters look alike. When I assimilated the two, I did not mean there were any unique comparisons. If you compare Nagisa to the other cast members, he looks more like the males than the females by a rather significant margin. If you were to see him without comparing him to the other characters, you could easily misgender him, but by way of comparison, his true gender is obvious.

More like the only visual similarity is their tsurime eye shape. They don't look alike more than any other two anime characters look alike. And he looks way closer to a girl in the show. That's just how he's designed to be.

It's as if we're looking at two different anime characters, maaan

He is a cutie, sure, but I feel he is more underdeveloped than he is feminine. The only visual disparities between Nagisa and Karma are minute subtleties; Nagisa looks more like the male cast in the show than he does the female cast. I am not necessarily saying he is not feminine at all, but I am saying he passes for a male more easily than he does for a female.