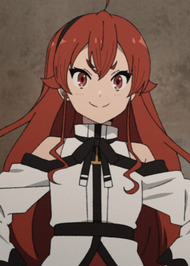 Finally, an example of a tsundere done right, and not done just for purely mean spirited abuse!... Praise the LORD!

[And I bold this statement above for a good reason.]

Far too often with many different anime and manga series, when tsundere characters are shown, they rarely show much development over the course of it. Some examples of very poorly developed and very seemingly cruel, tsunderes, in my study of multiple anime and manga series, include the following... Chiaia Flan, Louise De La Vallière, Serenia Iori Flameheart, Manami Kinjou, Saya Takagi, Ayano Kannagi, Sora Kasugano, Noelle Silva, and so many others one can consider to be "obnoxious" and "an ill-mannered tsundere".

All these listed tsunderes have one thing in common... They are all abysmal failures in having shifting character development and having any audience connection, all of them!...

Whether you liked any certain characters from my listing just now or not; the point being, tsundere portrayals are far often too similar... They hit the main character out of "love" or in anger in most cases, verbally abuse the main character at times to the point of the mc wanting to have a mental breakdown, and show little character development or describe some sort of change or progressions to their characters over time (either by moving in from being a tsundere, or justify and own up to why they abuse the main character). It doesn't, at all usually, connect to an audience when you have an anime that is meant to be more serious in its story and its lore.

So many of these tsundere characters in serious anime series have writers whom end up making the same abysmal failures to keep them from making a proper tsundere character, and especially a character that could show possible development over time; instead, creating and showing a failed and publicly hated fictional character in general. Most people either lose attraction or care for them, because the tsundere trope is so often mishandled and not focused upon. They can end up being a "turn off character", a character viewers wish had never existed, or even a character the viewers would wish could just die off in the series or just suffer in some way.

Because of this, tsunderes sadly are just a hit or a miss.

Thankfully, however, Eris Boreas Greyrat isn't that kind of typical failed, and mishandled tsundere character. She may start off in the beginning as "annoying", "violent", "rude", and "ill-tempered" to some; but her development does show over time. You really start to build an attraction and a care for this character's personality once the viewer starts to see reason to care for this character. You even start to understand the love she has for the main character, Rudeus... And I am talking about caring, compassionate, sentimental, memorable,  love... And this isn't the kind of forced/aggravating tsundere love feeling either like, "I'm hitting you and abusing you because I love you" kind of feeling, or even *hits the mc* "it's not like I like you or anything, dummy (baka)!

Both are common tsundere stereotypes in their tropes; but thankfully, Eris doesn't primarily center only around this trope. And Eris isn't the character to just fall into this trope with unexplained reason. Her reasons are pretty much given out, and while annoying at times, expresses herself in this positive light. Her cuteness can also still be expressed for her developing admiration to learn magic from Rudeus; and for Rudeus to learn sword combat from her. I guess my only concern is that her and Rudeus are blood related cousins and already share the same last name; which is definitely still incest by definition... But you still understand the developing love that Eris has for Rudeus, and the developing love Rudeus has for her. Definitely a character you lean to connect and relate to in some way over a certain period of time.

All and all... Eris is one of the example of a tsundere done right, and expresses that gradual shift in development! A cute, beautiful, sometimes funny, strong, relatable, and understanding female character! Thankfully, not a character mishandled.

She's badass, short-tempered, and punches mfs, I love her. Also the way she went all out with her sword skills in the last few episodes was amazing, wish more of the anime was so action packed and violent tbh

She is the worses snobish brat I've ever seen in anime

as many, i didnt like her at first, but now.. i gotta be honest she's a badass