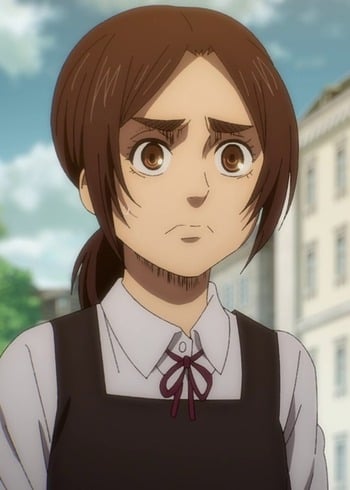 I wanna say more but in short: Get the fuck off off her, she's amazing character with nice development shitty haters

She is annoying but gets better in the manga. Still can't forgive her for what she did to Sasha.

She's just an immature child who's forced into training to become a warrior in a young age. As much as I don't want to see Sasha killed, this kid also suffered as well, she saw two of her friends died and her hometown being terrorized just like Eren, but unlike Eren he saw his mom die right in front of his eyes. If you saw Eren in his younger years way even in the battle at Trost, they are most likely have the same attitude both arrogant and annoying but as they came to know more about the truth both of them just came to understand and become more mature than before. I respect all your opinions and I know some of you hate her but don't waste your time in hating a fictional character and even sending death threats to the voice actor

Really blew up since the final season came in.

While I don't hate her as much as I used to but what can be said, the one reason I don't mind her surviving is Falco as he went through way too much. He's way too pure for that world.