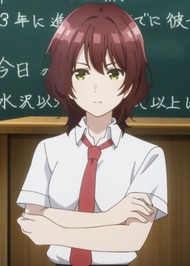 I hate her so much so she's been fake and was toying with Fumiya the whole time while she herself beeing a fake yet the secound when thing got a trun for the worse for her tries to cut all ties...

The fact that someone like her has the gall to give out life advice when her entire fucking life is a lie, and the fact that she's a bitch while doing so, makes this series unbearable considering she's a main character. I dropped the manga because of her, and I gave the anime a chance hoping that perhaps they might have made her slightly less loathesome... But... They didn't. So I dropped the anime as well.

Frankly, I don't see appeal of her character or why anyone would tolerate her bullshit. Then again, some people actually like Louise from Familiar of Zero for some reason, too.

Worst character in the anime. Such a fake personality living a fake life, she deserves nothing. Any time spend on her is a waste. The end of ep 11 and the entire episode 12 was ruined thanks to her.