Aka: Lady Erina, The God Tongue 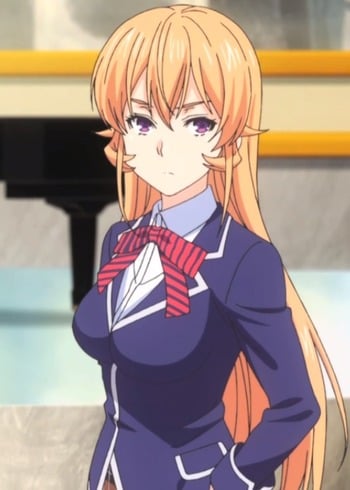 When I started to know Erina in the beginning, she would have a good character person, but as the series progress she to act more like an absolute BITCH! I really hate Erina so much as much I hate myself all because did she want to have a relationship with him all because of his father? Or because of his talent cooking? No absolutely no, I don’t give a damm about her or her lack of herself, Erina doesn’t deserve to be the top girl in food wars, Megumi should’ve been the top girl if wasn’t Erina, she just gives on my nerves, what a bitch Erina she is, absolutely big NO!!!

After finishing seeing Shokugeki no Souma in the manga and thinking for a moment, I came to the conclusion that she is the worst character in the work for being a Mary-Sue and you know why?

1-She is beautiful, (At least until the end of the last bow).

2-She is Tootsuki's most beloved girl.

3-She was born with the language of god which is one of the most valued things within anime.

4-She became the director of Tootsuki.

5-She is Tootsuki's most skilled cook because she became the director.

6-She was the only character in the entire manga who never missed any Shokugeki in which she participated.

Other than that in the last saga, I honestly couldn't see any good in it, until her design was totally ruined with that ridiculous haircut and to finish it, her development was completely forced in that she had Soma. Megumi was the one who should have stayed with Soma because she is a well-written character but as no one realizes this ...

Man were the hate coming from tho?