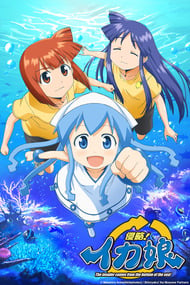 Who's up for a squid-vasion? / Hold on a squid, aren't you a compatriot? / Aren't I just the squiddiest?

Wait a squid, aren't you on my side? / Up for a squid-celebration? / Wanna play with this squid?

Aren't you a fraidy-squid? / You're the squid's sworn enemy, aren't you? / Squidzooks! Aren't you a new recruit?

How much is that squiddy in the window? / Ride 'em, Squiddy! / You're phonier than an 11-tentacled squid!

Not from this sea, are you? / Why not join the school of fish? / Wouldn't having a pet be squidtastic?

Up for an inkredible Hero Stage Show? / Squidn't you be studying right now? / Is this inkfatuation or love?

Focus your tentacles on her! / Feeling inkuisitive? / A squiddle work never killed anyone.

Aren't you a squiddle under the weather? / Ink that a new ability? / Squidn't you bring an umbrella?

Wanna doorbell ditch, squiddo? / Can squids put on make-up? / Holy squid! Is that a secret weapon?

Isn't that a Teru Teru bosquid? / What squidsn't there to like? / One! Two! Three squids, you're out!

I ink that's a doll? / Isn't that fishy? / Squids to match my mountains.

StoryIt’s no secret that I like silly slice of life anime. Generally the less plot on display, the happier I am. So, when I fired up Shinryaku! Ika-musume, I knew there was a significant chance that I’d at least like the show. But this little anime’s potent mix of outlandish situations and well-placed narrative fake-outs surprised even me. Shinryaku! Ika-musume starts with an absurd premise: a squid-girl rises from the ocean intent on enslaving humanity armed only with an imperious attitude and ten powerful tentacles. However, thanks to her relative naivete and short attention span, she finds herself railroaded into helping at a quaint beach-side restaurant. Once divorced from the potiential plotline of subjugation and rule, the show pleasantly morphs into a slice-of-life venture that uses Ika’s eagerness to learn about the human world and her air of superiority to manufacture laughs through three micro-stories every episode. But Shinryaku! Ika-Musume burns brightest when its writers flex entirely unexpected plot muscles. While keeping its absurd tone, the show on occasion reaches out, dead-serious to pluck your heartstrings with alarming acuteness. “Wouldn’t having a pet be squidtastic?”, for example, tells a story of love and loss that seems incredibly poignant until its final twist delivers a load of narrative whiplash that will nearly put you in a neck brace. Similarly, watching Ika-musume bond with her first umbrella during "Squidn't you bring an umbrella", seems like silly, harmless fun until an accident sends things horribly awry and you find yourself feeling for the poor, bereft squid-girl. The juxtaposition of genuine emotion with outright strange situations and slapstick comedy must be some dark alchemy designed to deliver laughs from unexpected places.AnimationShinryaku! Ika-musume borrows heavily from the artistic sensibilities of both School Rumble and Lucky Star. The clean, attractive character designs exude moe, deform pleasantly for comedic effect, and can spring into motion when the show requires it. By keeping the everyone’s face uncomplicated at the start, the animators are free to paint any and all emotion onto each actor as dictated by the script, and this flexibility helps maintain the show’s healthy relationship with the absurd and transforms well into more embellished forms when the script calls for an overwrought still.SoundFor those of you who love characters with adorable vocal tics, Ika-musume offers a treasure-trove of material to make you shiver with delight. Juri Aikawa’s shouts and yelps have a bizarre magnetism that makes Ika’s voice more adorable as she gets increasingly confused, desperate or excited. The seiyuu’s control of tempo means that the lead character remains fully in charge of every scene playing off both the equally zany Sanae (an overly-affectionate Kanae Itou) or Cindy (Hitomi Nabatame) and the numerous straight men like Eiko, Chizuru, or Goro.CharactersIt would be hard to come up with a more entertaining bunch of one-dimensional clowns. Since each short story focuses entirely on the quriky Ika-musume, everyone else serves as either sounding board or prop. Eiko and Takeru, for example, function primarily as straight men, introducing Ika to new experiences and allowing the naive protagonist to allow her preconceptions to run wild. Their benign responses of annoyance and useful enthusiasm form some of the best humor of the series as they allow Ika set up her own punchlines and lampoon herself (the places she goes whenever Takeru strokes her ego almost always result in a good laugh). In contrast, delusional characters like Sanae and Cindy offer the lead a chance to be the voice of reason, victimized as she is by the otaku leanings of the schoolgirl and the unwholesome experimental urges of the CIA agent. The combination of these two types of interaction give the show a playful ebb and flow that keeps its running gags from wearing out their welcome. But in the end, Ika with her extremely short attention span and unflappable ego, serves as the series’ whimsical maypole. Unable to stay focused on her primary task of “squid-vasion”, she throws herself heartily into whatever activity presents itself with delightful results. Whether we watch her stare down an ace baseball pitcher while helping Kiyomi’s team win a pickup game, or giggle as she gives her first umbrella a series of increasingly epic names her gusto for life forms the backbone of the humor. She rests firmly in in the tradition of characters like Tenmna Tsukamato and Yui Hirasawa who react in a predictable manner to every situation but with a twist. This stark contrast between her hyper-able tentacles and her otherwise klutzy ways allows her to react both conciously and unconsciously to situations which in most cases delivers two punchlines at once--an interesting twist to the otherwise predictable 4-koma pacing.OverallShinryaku! Ika-Musume shoots for cute and quirky, nailing the target dead-center. By mixing its able production values with a chuckle-worthy cast and clever storytelling, this anime should worm its way into the heart of anyone with a dark sense of humor and a love for absurd slice of life.

What I Liked: Consistent animation, bright simple visuals, good (but plain) character designs, great voice acting (especially from Hisako Kanemoto, the VA for Ika Musume / Squid Girl, and Rie Tanaka, the VA for Chizuru), unique characters (in terms of personalities, anyway). The squid puns. What I Didn't: The pacing of the final episode was a bit off-putting (i.e. going from the Volleyball skit to the "Pinch Jyana-IKA" 2-parter seemed a little jarring to me), but it wasn't enough of a problem to warrant a mark against this series.Final Verdict: Shinryaku! Ika Musume is one of those skit-based comedies that manages to surpass expectation and deliver a pleasing and entertaining arrangement of characters and situations. I feel kind of bad for ranking this so high, almost like a consumer who feels cheated after "falling for" an effective marketing campaign, but I really thoroughly enjoyed this series. 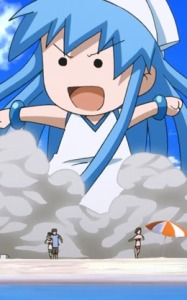 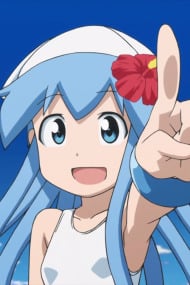 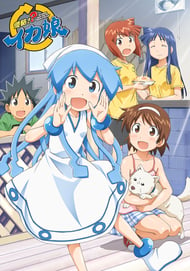 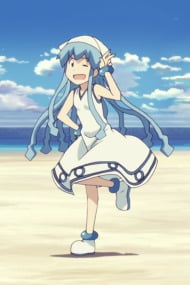 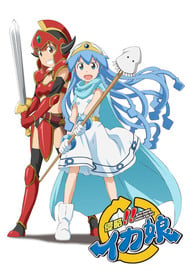 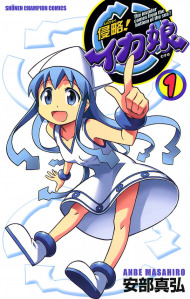