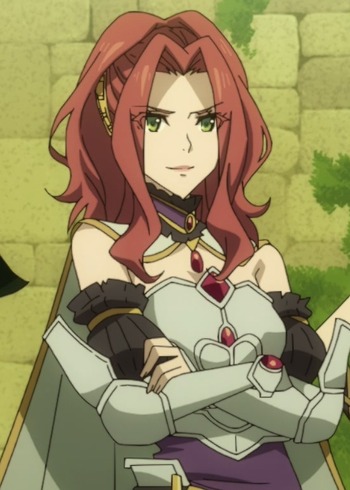 I hate Malty ("Bitch"/"Slut"), from the beginning she was an unlikeable girl, you think she wants to herlp Nafumi But nope, she is out to make his life and reputation a living hell.  From the beginning she was awful, pretending to help him, then accusing him of in my opinion, one of the worst crimes a woman can accuse a man of.  She destroyed his reputation, she Tried to help cheat a race, threw a fight to get Naofumi to fight alone, then tried to frame him for setting a forest on fire and trying to make him seem like he kidnapped her younger sister.  On top of this she tried to have her sister killed to take over and then conspired with the church, whether directly or not, it does not matter, her actions almost got the heros killed, almost caused a cult to take over. and then when she is tried, she tries to lie on multiple occasions.  Her trial could have seen her killed but that didn't happen.  She was given a second chance and then what does she do? tries to poison the same guy who she tried to ruin his reputation and who let her live.  She truly is a descpicable individual and Honestly, i would put her higher than this because of her actions

I hate her so much, I remembered getting very annoyed every time she appeared. Well till now, I guess.

Renovate her face with fists, throw manure at her, stomp on her spine, break her fingers, cut pieces of her flesh piece by piece as slow and painfull as possible, then Actually make up for the rape accusations being true making her want to kill herself out of shame, she doesnt deserve anything less than that.

damn i hate a lot of sadist characters on various animes but she reaches levels beyond them, making them look like saints

she be number 1 hated tbh

They kinda messed up her name, if I remember correctly it's bitch now