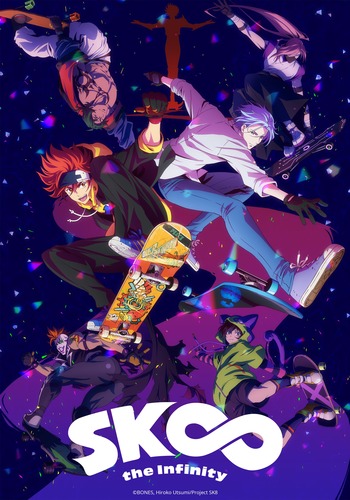 both are Racing by skateboard

MC is a teenager

bothe They have tournaments

After his defeat in the 14th Cyber Formula Grand Prix, hotshot racer Hayato Kazami decided to change machines and give up his Asurada. Now, during the 15th Grand Prix, more chaos has ensued: Aoi Zip Formula has a new president, and a new racer has been introduced: Phil Fritz! Not only is he good at what he does, but he has a never-before-seen machine that appears to be unstoppable. As Hayato progresses through the races, he decides to use the new Asurada. Can Hayato and his Asurada challenge their limit once again by beating this so-called 'unbeatable' opponent?

In the year 2020, the racing team Aoi Zip Formula was disqualified for the next year’s Cyber Formula race after they were caught cheating. Jotaro Kaga plans to return in the year 2022 to race against the all time champion Hayato Kazami; but though both of them have amazing skills as Cyber Formula drivers, Kaga’s machine cannot beat Hayato’s Asurada. Saving the day is Kyoshiro Nagumo, who appears before Kaga and offers him a new machine called Ogre, a Bio-computer machine! Ogre is the only machine that is on par with Asurada, but using it puts a major strain on the driver. Can Kaga beat his rival Hayato with this new machine?

After Hayato's amazing victory in the 11th Cyber Formula Grand Prix, he had an accident in the 12th Grand Prix and critically damaged his body. Asuka Sugo decided to care for Hayato and in return, Hayato proposed to her and promised to hang up his racing shoes forever. Taking Hayato's place in the 13th race is Henri Clayton; but unable to resist the call of the track, Hayato breaks his promise and returns to drive another day. As Hayato continues to race, the "Zero Zone" manifests itself inside him yet again; .and now, Hayato must overcome his fear of driving, and challenges his limits once again, in the "Zero Zone."

In the new century, race machines that are equipped with complex computer systems are called Cyber Formula. Hayato Kazami, while delivering a new cyber machine to the team Sugo, gets ambushed by an unknown organization trying to steal this new machine named Asurada. Unknowingly, Hayato climbed aboard Asurada and drove it to safety, but now, no one can drive Asurada. Together with Asurada, Hayato must take on the challenge of being the youngest driver of the Grand Prix in order to preserve the dream of team Sugo. Now, Hayato must face the challenge of winning the Grand Prix, while uncovering the true intention of the mysterious organization trying to steal Asurada.