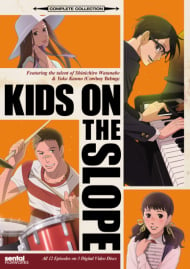 Story: For once, I actually wanted the storyline to slow down a little. I so thoroughly enjoyed the plot and the intricacies between characters that I wanted to see more. But, with what I was given, I can't really complain. The story is of a lonely boy that's been on the move his entire live. Now that he's finally been allowed to settle down, he's a fish-out-of-water in post-war Japan. The story is a whirlwind of love, friendship, music, and coming-of-age. At one point, the protagonist comments that his life is like a jazz number, full of improvisation. The plot seems a little like that sometimes, but somehow, it remains easy-to-follow.  Animation: I've only seen a couple pieces down by this studio, so I can't say much about their animation style as a whole. This anime, however, had very subtle animation points, such as the smallest widening of the eyes to convey serious emotions, to the harsh movements of Sentaro's drumming. The facial features remind me a bit of the older Ghibli style, actually.  Sound: Do you like Jazz? Because that is what this anime is all about. I loved both the opening and ending themes, but the interwoven jazz really tied it all together for me. There are some references to period pop pieces, like "Some day my prince will come" and "My Favorite Things", but mostly it's all about the jazz. And usually, I would critique on a musical anime's ability to convey the style they chose, but I'm too busy swaying to the riffs.  Characters: The main cast, Kaoru "Richie", Sentaro, and Ritsuko are given a rich, beautiful storyline all their own. They are given grand, sweeping emotions that made me attach to them. Their emotions, their feelings were the main points of the plot. The side characters, like Jun, are given backgrounds, depth, and a little flair that makes them more than simply background (which I have seen far too often). I think my only critique is how quickly the characters change emotions, but with the plot flying past, I guess that's to be expected.

I'm gonna try and record my thoughts while they're still fresh in my mind-- I just finished marathoning the series after having some interest in it for quite a while. I rated Sakamichi no Apollon around a 3.5 in my star rating and here's why, without spoiling too much of what happens, though do read at your own discretion, as it does spoil things about the story even if its not exactly what happens. The tonality, time setting, and the music is fantastic, and I had a lot of fun with it. Though not outstanding, the little flickers of how the love for jazz amongst characters is represented in the relationships the characters have with each other is heartwarming. I relate to this a lot, mainly because I always love sharing and playing music amongst my friends and loved ones. One of many cherished pastimes, and I believe this to be one of the series strengths, though minimal it was still nice to have. However, as an audience, aside from the music and friendships portrayed, we are taken on a bit of a broken-down emotional rollercoaster in one form or another. Once I reached the end of the series the only thought I had was "Is that it? Was that really all worth it?" To be harshly put, some of the things that happened between characters almost seemed useless because they were either never wrapped up or seemed just slathered in there to have some form of scandal. Take it away theres not really too much of a plot; theres parts but not much to have a series built on. A lot of other plot points that were built up were never really tied up either, adding to the uselessness of some of it. It wasn't too satisfying, and though to my own tastes and interpretation, a lot of the drama I found cringe-worthy and oddly cliché.  I genuinely love the main characters, and I cherish the relationship they have with one another, but the character development is rocky. Characters will make progress, but then do something and take a few steps back again, doing this more than one or twice. Tied in with odd story choices that don't really influence the end too much adds to my unsatisfied viewing experience. The ending is bittersweet, but confusing. But, all technicalities aside; I do believe in this series and the potential it has, and I love the charm of it. Though a part from the music and some of the moments the friends have together when performing, there's nothing really too memorable about it, and I'm not sure if I'd ever watch it again or recommend it a lot. It is, in the end, up to any of those reading this if its worth watching it or not. I definitely would say it is to an extent if you love music and performing with your friends, and you think about the good old days more than once. It definitely took me back there.

This anime is not overranked! I Must say this is far one of the best anime i've watched. It has it all! I love the plot is about this boy having a tough time with life. Im a sucker for these kinds of main characters! Then he starts to make friends and experience feelings he never have experience before. Though I will say that if you're not a fan of music, this might not be for you. Since Im myself is a piano player, I love that the music is getting them together.The anime have a great distribution with friendship, life story, love and obstacles. Its really fit for a 10/10 rating! It is really worth trying!The story takes place in the 60'es, or at least thats my guess. Im actually not sure. But they love Jazz, their outfits and the way they act, the surronding tecknology is all saying that this takes place somewhere after WWII.. (Just checked it up on Wokipedia, 1966, I was right!)Even though Im not a fan of historical animes i must say this one took away my heart. Im head over heels inlove with this, even though its having so many parts to it, that i normally would avoid. There is nothing to complain about in this anime, its not slow paced at any rate, I wasn't borred at anytime. There is really not a single episode that made me wanna skip it. I simply love the story... I love the ending as well.. You NEED to watch this! 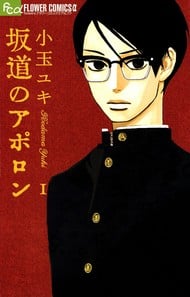 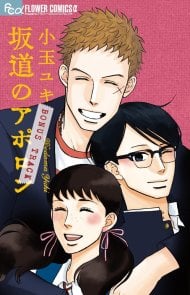