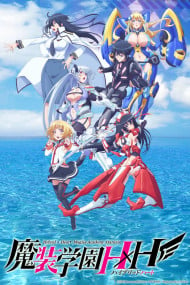 One day, humanity was invaded by another world. Having experienced that battle, known as Other World War I, humanity moved to marine floats, built for emergency evacuation purposes, as soon as Other World War II began. It's around that time that Kizuna Hida is summoned by his elder sister and visits the Strategic Defense Academy Ataraxia where he meets Aine Chidorigafuchi, a girl who uses Heart Hybrid Gear Zeros to fight the otherworldly enemies. He has a tough time dealing with her, but when her Gear runs out of energy, the only way to get it back in action is to do something lewd to her!

I dont know whats with the massive hate on this anime. Sure the beginning first 1 min might not make sense, but guys, its 1 min of video and the hate rolls in. Take actual time on the story and plot and it does give it a unique sense of feel. Though the anime is pretty similiar with other animes that have come out (Infinite Stratos/Hundred/Etc.) it doesn't really deserve that amount of bad ratings. If you are interested in any of these genres, Action, Adventure, Romance/Ecchi, Mecha, Harem, theres no doubt it is actually is quite interesting. Maybe the characters look pretty similiar to all other animes but at least the main character ain't some eggnot like Infinite Stratos. There's plenty of fanservice if anyone is interested as well as a pretty good sense of plot. I have read the light novel and the next few episodes should all be a blast of fun :D

Just dont take this seriously, its really ment as a joke. This thing is so ridiculous, its good. In a nutshell the story goes like this, aliens from another dimension have invaded and humanity has developed a new weapon system to combat them called the heart hybrid, here comes the funny part, the only way to recharge it is by doing  lewd things with the protagonist. What follows is a series of  ridiculous and funny moments. I'm serious, this thing is so stupid its good, its typically what you expect from a ecchi/pervert anime, but its just how sheer ridiculously its presented makes it good. As I said before dont take this seriously and dont watch it in front of any family member.

Masou Gakuen H x H (Hybrid Heart Magias Academy Ataraxia) – This is a mech/harem. Invaders have come from another dimension, like kaiju, and have conquered earth.  The invaders can instantly travel through Inter-dimensional portals that can only be opened over large land masses. To avoid being ambushed by the aliens and their portals that can be opened virtually anywhere on land, the survivors of Earth have escaped onto these man-made, floating islands that are adrift in the middle of the oceans.  These invaders fight using large mechs and seem to appear, wherever they can, to attack indiscriminately in a never ending quest to eradicate mankind.  The world’s armies seem to be completely ineffective at laying even a scratch on these aliens, yet they still exist, if only to act as place holders until Earth’s real military answer can arrive on scene.  Why would we keep pouring resources into something that doesn’t work?  To combat these aliens, Earth may or may not have created these power suits that can only be piloted by teenage girls.  These power suits expel a large amount of energy which takes a relatively long time to recharge, which would probably be fine if the attacks weren’t so frequent.  If the power level of these suits goes to zero, the user dies.  Our protagonist has a power suit of his own – the only one in the world of its kind, apparently, and cannot be replicated (God, bless it).  His suit has a special ability to fast charge the other power suits.  To fast charge these lady’s weapons to get them back in the fight lickety split, he must cause them to orgasm. The added bonus is that if he can cause them to have an even greater orgasm, he can overclock these girls to temporarily give them immense power that is not possible by just a normal recharge.  He is the only fast charging station for these power suits in the world, which gives him the government sanctioned -and encouraged- green light to plow the fields of the world’s best.  To facilitate the need for fast charging on the battlefield, the military has created a special bunker that can be forward deployed, at a moment’s notice, to the frontlines, where these soldiers can take turns getting their thang wet with our hero, and back on the field as required.  This bunker works similar to the holodeck in star trek, and its sole purpose is to create any environment or circumstance imaginable to get these girls in the mood to be “serviced up,” and back in the trenches as fast as possible.  It’s astonishing, the amount of government funding that went into the research and development of the most efficient ways to get a girl off.  Boy, would I have loved to have been on THAT committee. What’s not to like about this show, right?  -One of the backdrops is the island of Guam – and it looked like Guam!!!  Which is pretty phenomenal, in my opinion.  Although pleasing to the eye, the girls are barely likeable, at best, and very little character development was done for them; not enough for me to really take stock in them, anyway.  The main character is not terrible. He’s not a complete nose-bleeding nice guy, and he’s also not a complete perv, either.  He takes his job seriously, and I appreciate that.  He’s actually fairly well-developed, considering.  I do have one major gripe about this show – just one? Yeah, really.  I am part of this show’s target audience, after all.  –But, Masou Gakuen went out of its way to pander to a loli fetish – for no reason, and I really, really hated it – and I hate almost nothing.  Our hero was tasked to review a list of all the girls and find a new candidate to receive one of these power suits, and join the ranks of his harem.  Of all the potential girls on the island, he chose a 12 year old girl.  Although most of it is handled off-screen, it is implied that he had sex with that girl – and it wasn’t even questioned! Whatever it takes to win the war, right?  In my line of work, I can certainly understand that.  I mean, only if out of all the girls, she was the most qualified, if she would give us the greatest chance of winning and surviving, and if there were no acceptable alternatives… but was there really no other way?  His decision to choose her just seemed like she just had enough of the boxes checked off to be A candidate, I did not feel like she was made out to be THE candidate.  -Other than that, there is some entertainment value to this show, but unless it gets another season, Masou Gakuen is incomplete and there are many questions left unanswered. I feel like if you can get passed the ridiculous premise, the show is brain candy watchable, similar to like when you’re watching kung fu movies; you just gotta accept that people… fly. 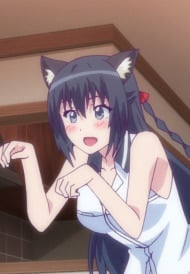 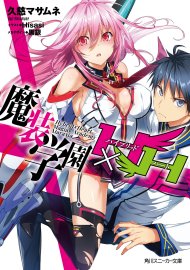 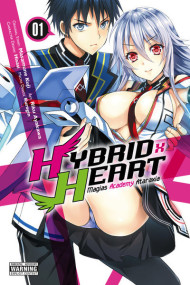