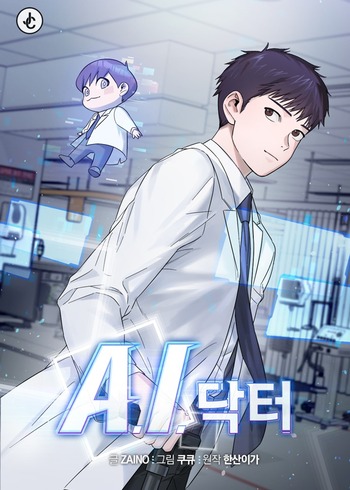 *Both of them (the MCs) were underestimated.

*Something happened to them that made them smarter than before.

They both dream to be one of the best in their own course, they were both underestimated, but then was soon made to be a highly/greatly respected person in the hospital once their colleagues(of their own respective dimensions) realized how good they managed their course.

Who needs studying when you’ve got the ghost of a 1950’s doctor by your side?!High schooler Mujin escapes the ER with a mystical scalpel, and now he and Aclé, a ghost doctor, are stuck together. With Aclé’s intellect and Mujin’s bravado, the two make the best of their situation, acing exams and saving lives! But their escapades are catching unwanted attention. Everyone from the mafia to esteemed doctors want in on Mujin’s talents, but no one knows Aclé exists! And with Death looming around every corner, how long can they keep up this charade?

Both are similar due to the fact of having someone help them in making the diagnosis.... in AI's case it is an AI and in Genius doctor it is the ghost of a doctor...

If you had the power to heal the world, would you have the strength to make it happen? Youngjoon Ryu, a research scientist at one of the biggest pharmaceutical companies in South Korea, must step up to this challenge. After being infected by an artificial cell creation project called Rosaline, Ryu's suddenly able to perceive heightened biomedical knowledge via auditory and visual hallucinations. With his brand new superpower, Ryu vows to overcome the corruption of big pharma and create medicine for the good of all humanity… but will he succeed?

Both have similar plot and both main caracter have artificial intelligence with tham but one of them is a doctor and other one is a scientist.

Patients who can be potentially saved, die every day. And to prevent that, a doctor takes a stand. A doctor, with a strong sense of duty and responsibility. A doctor, who stands as an angel in the Trauma Center. Witness traumatologist Baek Kang-Hyuk's journey as he restores the Trauma Center to it's original glory.

The most advanced doctor of a university hospital, a walking cans-intern. Choi Tae-soo, who has spent his days struggling as an intern, happens to be on the DeathBed of Richard Caprene, the world’s best thoracic surgeon. Surprisingly, all of Caprene’s medical knowledge is transmitted to Choi Tae-Soo..!! The Miracle Medical Drama of Choi Tae-Soo, a Genius thoracic surgeon with a kind heart!

The misadventures of patients in a mental ward, from the viewpoint of Sheena Jung, a nurse in the early stages of her career. Sheena works hard to take care of her patients and get along with her colleagues. She treats patients with various mental illnesses, such as mania, depression, delusion, and eating disorders. In the process, she learns how to treat her own self with love and kindness.

Till We Meet Again

I work at a nursing home, taking care of elders living their last days. I deal with their childish tantrums and shed tears as I listen to their life stories. They constantly amaze me with their insights, and most importantly, they remind me of the value of life.