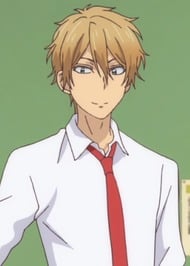 As a character I like him, but as a love interest for Kae, no. He ranks 4th for me.

I know the comments said he gets better but no...I just can't get over how shallow this dude is. I was going to say "Why Kae continues to let someone like this hang around her is beyond me", but then I remembered that it's because she's a cringy fujoshi that sees each male as just another dude to put her creepy fetishes unto, so...

Listen, I'm biased because I fuxking love Nanashima but he did become more likeable, especially in the manga. He's a good brother and you gotta respect that, plus, him and Shinomiya are pretty damn funny being so in sync, and mild manga spoilers below (mild because it's hardly mentioned in the manga, this is more obvious in another manga by the same creator's bonus chapter), but him and Shinomiya actually end up together in the future (somewhere between 4-7 years later, it's shown in time skips) and I find it amusing rewatching the anime knowing that lol.