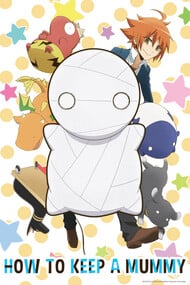 Kashiwagi Sora is living a normal high school student life, when his "adventurer" father sends him a mummy from his travels in Egypt! Sora balks at the letter from his crazy dad ("I found a cool mummy, so I decided to leave it with you, son!") at first, but the mummy that emerges from inside the huge coffin is a mere 12 centimeters tall--small enough to fit in the palm of his hand... Not only that, it's shy, a crybaby, and most of all, heckin' cute. And so, Sora and ends up keeping the mummy, naming his new little buddy "Mii-kun." But living with a mummy might be easier said than done...!

White, Round, Tiny, Wimpy, and Ready

Toyed With and Chased Around, Being Small Is Hard

It's Scary When Someone You Care About Gets Sick

You Can't Play Tag by Yourself, and It's Fun to Play With Others

Go Away Kindness, Go Away Fear

I can't grow all at once, so I'll grow over time

Scary Dreams Are Okay Because I'm Not Alone

A Surprise From Afar

I Want to Be With You Forever and Ever

Saccharine That is how I would describe this show in one word. It is far too sweet and too cute by half. I watched How to Keep a Mummy as a recommendation from Natsume Yuujinchou and while I can see the similarities, this show does not measure up. That is not to say that How to Keep a Mummy is particularly offensive, because it is not. But where Natsume Yuujinchou seems to be written for a teen to adult audience, this show seems to be written for elementary school children. If I had small children I would be fine having them watch this; I just don’t particularly want to watch it with them. The show is also very uneven. While the first half of the season involves the befriending and adoption of these ridiculously cute monsters, nothing bad ever happens and everything is rainbows and sausages. The second half of the season tries to introduce some drama and conflict to further the story, but it all feels forced and unnatural after the tone set by the first six episodes. If all you are looking for is something cute that you don’t have to think about, then this is a fine choice, but if you want something with more substance, try elsewhere.

An enjoyable Anime if you ever wondered what your life might be like if one of your plushies were to become alive and have a personality. It is really cute with a fair amount of humor, and at the same time, that is all it really offers, but just that alone is really enjoyable. There is no real purpose or story, it's the daily interactions between a few characters and their special "pets", so if you want a meaningful story, it isn't here. These special "pets" make a simple noise, each have a specific personality, and are the major selling point for the Anime. This, combined with specific actions gives them quite the character, oddly enough. It goes as far as dedicating half an episode at one point where there is no dialogue and it tells it's own little story through this. Considering the importance of these pets to the show, the execution and presentation is very well done. Consider them what makes the Anime stand out and remain memorable, it's simply cute & funny to watch. It's not all entirely perfect either though. Aside from any real direction, there are moments of drama, more than once. Considering the underlying cute and funny nature of the Anime, these moments didn't contribute very well. It would be far more enjoyable watching the pets go on adventures, or do cute and funny things, and the drama seems a bit forced in an attempt to create some purpose. Sometimes the Anime where you can simply sit back, laugh, and be filled with cuteness is all that's needed, and aside from the unncessary drama, it does fulfill that very well. Overall, I love anything cute so I loved this Anime. Most people have that special plushie, or have had one at some point, and this fulfills that little fantasy of "what if they were real?". It's a very casual Anime, easy to marathon, and something I'd recommend for watching with anyone that you aren't afraid to possibly show your emotional or soft side to. A lot more could be done with this so hopefully we will see that in the future.

How to Keep a Mummy Back then I heard about this anime adaptation, which is supposed to be about a very lovable mummy. For once, I really can't deny it, the anime has an enormous "cute" factor for these little fantasy animals, especially the mummy Mii-Kun (although the name could hardly be less creative). Accordingly, yes, the anime is adorable and cute.-However, that's it. Miira no Kaikata is still not just an SoL title, but a comedy. But it's not even an easy meal, this anime doesn't even get baked.The humor roughly corresponds to what would make a 4-year-old child smile. The jokes are mostly so flat and boring, you can almost be ashamed. Examples -The mummy is lying on the ground and is not moving "Oh no, he has become a real mummy!" - There is a coffin in the living room "I hope Dracula won't come out now!" - Of course, with the protagonist's exaggerated reaction to this. and after that caliber, it went on. Only episodes 9 and 10 were able to create some fresh air through some noteworthy scenes.However, I wouldn't go that far and claim that this anime is more for kids, no. It contains signs of violence, some blood, and a fairly obvious incest joke. I assume that it is at least aimed at young people. In that sense, the whole thing is immensely disappointing. Normally every little comedy, at least 1x the episode, delivers something worth mentioning, here you chew on a chewing gum that repeats itself. However, episode 12 kept me entertained very well. In the sense of having as many mistakes, questionable actions as it can be. It practically seemed like they stuffed everything possible to create a 20-minute episode out of 2 scenes that could have taken 2 minutes each. Even for the conditions of a small SoL title, what was delivered here was almost insulting. Story Practically nothing, they tried something towards the end, but apparently had no deeper reason. Has been closed quite irrelevant and practically amusing. In any case, it is still not a story-based title. Animations / pictures Very weak and practically below average. The animations of the monsters and certain other scenes were deliberately designed very lovingly and beautifully. Apart from that, it was rather daunting. The faces were mostly drawn in a disturbingly bad way, and the drawing style is as simple as it can be. The movements if they ran and the background left a lot to be desired. Characters Boring and uninteresting. At least with a comedy title, one could have rhymed a few interesting personalities. Our group consists of Nice Boy, Tsundere Boy, Nice Girl, and Nice Boy2. Obviously, the Tsundere was the most bursting character. He is at least the only one who had monologues and had at least a few noteworthy scenes in his episode. The protagonist had at least only a somewhat mature appearance shortly before the end and has some nice dialogues. Other than that, it was empty. The girl and the other guy were as meaningless as they could be. No monologues, hardly any screen time, and .. in the last episode most of the time I didn't even know where they were and what they were doing. The monsters, on the other hand, were personable. Of course without content, since they are only plush toys, but nice. Music Intro and outro very weak. It is probably the first anime that comes to my mind where the intro felt like torture. Not only is it monotonous, it just doesn't sound appealing. You listen to monotonous music for about 90 seconds and see the same scenes again and again. Intro barely stood out. Conclusion This title can only be viewed using the following approaches.- You are not used to comedy series and you are a beginner.- You have no expectations and you just have to watch cute monsters playing. If this is the case, it is possible to view this title. Apart from that, it is enormously daunting and has only one episode 8 worth mentioning. 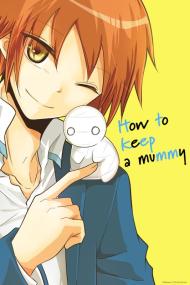