Science Fell in Love, So I Tried to Prove It - Recommendations 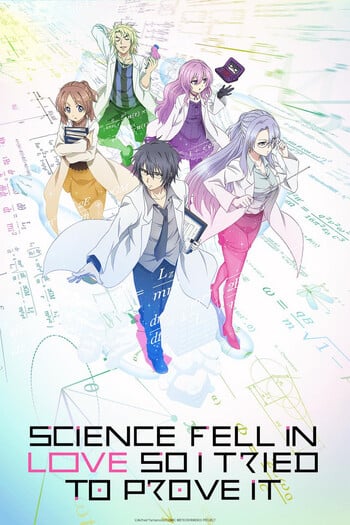 If you're looking for anime similar to Science Fell in Love, So I Tried to Prove It, you might like these titles.

Very similar shows with romance and comedy as a main focus, and two very intelligent main characters helming each one. Overly dramatic comedy in both, if you like that sort of thing than this is for you.

I mean, they're basically the same show. Both feature two characters trying to find their way into a relationship with each other, while navigating a tense battle of wits to get there. And both have a similar focus on comedy, as well as surprisingly similar plot points. Although I think Kaguya-sama is the more solid of the two, both are well worth the watch.

They both have similar premises where they practically refuse to admit they're in love and evade the situation altogether while still being an endearing and comical relationship between the two.

Both romcom happen outside high school so, older characters either adults working in the office (Wotakoi) or graduate students (Rikei). Both involve obsessions with certain things, Wotakoi with games and Rikei with science. Both go through slice of life kind of episodes, however, Rikei uses University Research theme while Wotakoi uses games/anime references. Both male characters are lone types who only care for their obsession kinda.

Both are based on adults, athough they are pretty different, the audience will be the same. In Wotakoi childhood otaku friends start dating, In Science fell in love, (people who have met before but are oblivious it was eachother) fall in love. I prefered Wotakoi though, watched it twice, and I dropped Science fell in love by episode 9.

After moving out on his own to a seaside town, Iori Kitahara makes a college debut he never anticipated. A new chapter of his life unfolds, full of diving with beautiful girls and shenanigans with a gaggle of lovable bastards! Idiot-expert Kenji Inoue and au naturel authority Kimitake Yoshioka bring you a glorious college tale filled with booze-fueled antics!

Both shows are comedies and take place in college. Grand Blue focuses on drinking diving, whilst RikeKoi focuses on science.

Otaku character found in both shows too. Grand Blue has more slapstick style kind of humour though. The main characters in RikeKoi are also slightly more intelligent.

MOYASHIMON RETURNS picks up where the last season left off as our protagonist Tadayasu Sawaki, a first-year college student at an agricultural university, continues to have the unique ability to see and communicate with micro-organisms and bacteria. Still alongside good friend Kei Yuuki, whose family runs a sake brewery, he devolves an even deeper understanding of bacteria world with his special ability!

Tadayasu Sawaki and his long-time hometown friend Kei Yuuki are finally away from home and ready to start university. They attend Tokyo's College of Agriculture, and the adventures start from day one! But that is to be expected, as Tadayasu has a special ability that is conducive to adventure and glory, especially in the world of agriculture and biology: the man can see, communicate, and interact with microbes! With ambitious sake-brewing upperclassmen, a sadistic postgraduate, and a clean-freak colleague, things can only become more exciting for the duo!