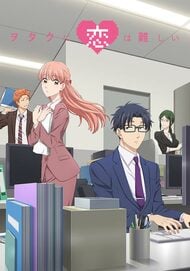 Ok, so if this isn't a must-see for any adult anime fan I really don't know what is.  It's basically a perfect blend of adult storyline, comedy, and otaku culture presented in a slice of life anime. First - the story.  This is a slice of life anime so the story moves along very slowly. Which is a GOOD thing. What good slice of life anime does is it lets the story take the back seat and puts the characters in the front row - and Wotakoi does this perfectly. Whats even better the story is about adults and not high schoolers and/or college students (a rare gem for anime) and is a rom-com completely free from love triangles and will-they-won't-they tropes which is almost unheard of nowdays. In the first season, we follow the beggining of a relationship between two otaku co-workers and ex middle school friends. The story blends comedy romance and slice of life elements perfectly and each episode is constructed in a way that lets the viewer learn a little more about a character or relationship between characters.  Relationships (romantical or not) between each of the characters develop over time and do not feel forced. At no point do you think 'wait, why the hell are those guys hanging out with each other?'. The romance part is handled pretty well too - both couples are in a different stage of a relationship and both have different problems which they have to overcome. The viewer can easily understand why every character reacts the way he or she does and why. Second: the animation. The animation is pretty decent but nothing spectacular. It serves its purpose well and blends the comedic and slice of life elements of the story quite well. I did like the computer-game related cutscenes used for comedic purposes. Its when the show presents a dilemma or a problem in a story in a way that makes a nod to some old game or anime. It's a nice touch and shows off the otaku part of the characters pretty well. Third: the sound. The sound is ok. I can't really say anything more about it. Fourth: the characters. The characters are where this anime shines. I mean there's a two minute shot of a guy making coffee and getting out of his apartment without saying a word for God's sake! Without good characters that make the viewer interested in what's going to happen this show would be hard to watch. Fortunately, all of the main cast of characters are pretty great. Both protagonists of the story are likable and relatable. Both have a very different view of being an otaku and both views are challenged, forcing them to change a little with each episode. Their relationship feels natural - its a little forced at first (which has a reason within the story) and grows steadily as they interact. Both supporting characters are well crafted and have more than one side to their personality. With each episode, the viewer gets to know them a little more. Also: as a couple, I liked them even more than the protaginists of the story. Verdict: It's great. Go watch it already!

I was really struggling to enjoy Wotakoi: Love is Hard for Otaku and a lot of it had to do with how little affection there is between the couples. It felt like I was just watching a group of friends just hang out and just looking out for each other. I wouldn't even say that there is a lot of chemistry between the characters, it's more like they've all just settled with  mediocre relationships. Their odd hobbies get mentioned a lot but I actually feel that it's not really that big of an issue in the series itself. Most of the time is spend at the office, at a place where they can eat & drink or at Nifuji's house. They're just friends, casually hanging out... The only one real character that is socially a bit awkward is Nifuji. He kind of walks around with one facial expression and just seems to struggle to get words out of his mouth at times. For characters that are trying to somewhat hide their relationships they do tend to hang out with each other all time time, even at work. Near the end of the season they're still not sure how to really talk to each other and miss reading each others signals which i really see as them just really not understanding each other at all, they understand each others obsessions but I really feel we're just looking at close friends rather then couples. 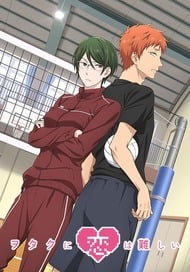 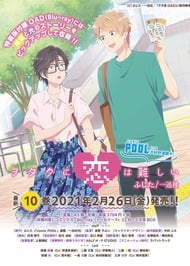 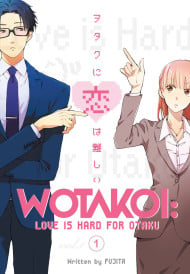