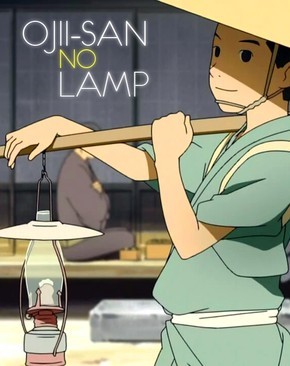 These series have a little bit of a different approach in that SHouwa Genroku Rakugo Shinjuu is more focus on romance and it's pacing is much slower than Ojii-san no Lamp.

In essence though, these shows have a similar setting of dealing with new technology (Ojiisan) or new forms of entertainment (Shouwa) and people trying to sturggle with them. This struggle is more pronounced and aimed at westernization and advancement of technology in Ojii-san, Shouwa has this more as an undertone. In general, the feel and setting are extremely similar.

Finally, the structure of the show is similar in that it's an older guy educating the younger generation of the past. In particular a somewhat dying medium in te Shouwe and the fleetiness of technology in Ojii-san no Lamp.

Both take place in historical Japan and are stories told by old men recounting the days of their youth. They deal with the reality of how modern progress can overshadow tradition, whether it be cultural or technological.

In both Ojii-san no Lamp and Millennium Actress, an older person reflects on their life and the past through storytelling. Threads of Japanese history and the development of the country are woven into the individuals' narratives. Furthermore, in both, valuable questions are raised about the significance of life and love in light of the changes that take place in the world around us, often beyond our control.

What I found fascinating about each of these shows is that they really allowed me to step back in time in Japan. Both celebrate a treasured past, and show how advancing technology affected the livelihoods of everyday people.

Because of her parents' work, a little girl spends a few days in the countryside. Her new classmates think she might be the legendary wind spirit Matasaburou.

The Chronicles of Rebecca

Rebecca is a 10-year-old cheerful and energetic girl who is the second of seven children. She lives in a rural town in Maine in the United States at the end of the 19th century. After her father dies, her family descends into poverty, and Rebecca unwillingly goes to live with her aunts Miranda and Jane. Rebecca loves her kind aunt Jane dearly, but her aunt Miranda is naggy and strict.

First-grader Masaya-kun is a crybaby despite his large stature, so he can't walk by himself on the dark path to school. The one who holds his hand is Akiyo-chan, a tiny but capable second-grader. Masaya wants to be strong like Akiyo and admires her, but one day, something happens that leaves Akiyo in tears. To lift Akiyo's spirits, Masaya goes trekking to the distant Ipponsugi forest to find the spotted bellflowers that Akiyo loves. But there are still many paths in the world unknown to him.

Aki Miyagawa moved to Tokyo to pursue her dream to be a taiko drummer, but had a hard time balancing her strict training regimen with her part-time job. Now, after 15 years, she's returning to coach others for a taiko festival.

When Emily Starr's father died, she was left in the care of her deceased mother's family, the Murrays. However, the rich and prestigious Murrays never approved of Emily's simple father, and she was thus not welcomed into loving arms. With her trusty cat and nary a possession, Emily left for her new home - New Moon - where many a joy and sorrow awaited her. Now, along with tough Ilse, artistic Teddy and loyal Perry, Emily will laugh, cry, and try to win the hearts of her new family.