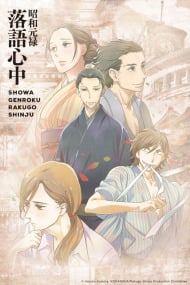 I'm so glad I decided to watch this anime: it's one of the best I've seen - and not only recently, but ever. It puts together an unusual setting, an engrossing story, very good storytelling and compelling characters. Hats off to the creators and the studio for a job very well done indeed! A warning to begin with: the first episode, about 50 minutes long, is a frame tale which sets the stage and introduces the main story that then kicks off starting from episode 2. I'm afraid it can be a bit tedious and off-putting as it starts from the end, so there are many things it's likely you won't understand and many innuendoes and undertones you will probably miss. As a matter of fact, I re-watched the first episode after having finished watching the series and I have to admit it made much more sense. Anyhow, it gives you the context in which the story unfolds. The story starts in contemporary Japan and then it goes back to the 1940s, slowly working its way to the present again. It's set in the world of rakugo, a particular form of Japanese oral entertainment whereby the performer sits alone at the centre of a bare stage and narrates usually comedic pieces involving the dialogue between several characters; the artist can convey to the public the alternating and different characters only by using his voice, tone, facial expressions and the movements of the upper part of his body. The protagonists are two young boys who in pre-war Japan aspire to become rakugo artists and present themselves to the rakugo master of the time, hoping to be accepted as his apprentices. So it's the story of the friendship between these two boys, the coming of age process, the clash with a very rigid establishment, the struggle to find their own rakugo style and gain popularity, the acceptance of   failure and social responsibilities - it's also about the future of rakugo (or lack of it in a world where the forms of entertainment are constantly increasing), the direction in which it should be developed and the maintaining of its very old traditions. But above all, I would say that it's the psychological analysis of two very different people and their relationship. Apart from the first episode which tends to drag a little, the pacing is excellent. I also enjoyed the rakugo performances and learning about entertainment in that particular historical period in Japan. The only thing that bothered me was the fact that Kikuhiko and Konatsu's relationship was not developed - I'm hoping that it will be addressed in the second season of the anime. Obviously it's a character-driven anime and the characters are all portrayed and developed exceptionally well and in a incredibly realistic way. They all have flaws, weakness and failings - but no facet striked me as out of place. Kikuhiko is the character with the most complex personality - actually I wasn't sure until the end of the anime if I liked him or not. But that doesn't matter; what is relevant is that there are no false notes in his depiction. Sukeroku, on the other hand, has a pretty straightforward personality - the contrast between him and Kikuhiku couldn't be greater, so it's amusing to watch how their relationship develops. I found their friendship very beautiful. It's also interesting how Kikuhiku, while maintaining his personality traits, changes and develops as things happen to him; Sukeroku, instead, stays pretty much the same nearly until the end - and honestly his apparent reformation doesn't strike me as believable; this isn't a criticism to the portrayal of the character. Going by how they are presented in the unfolding of the episodes, it seems to me that the two of them only work well together, not only as artists but mainly as people. Anyway, you have to watch it to understand what I'm talking about. As for the other main character, Miyokichi, I find her to be very true to her character; I mean, there are plenty of reasons to think of her - and dismiss her - just as a stupid woman. But that doesn't mean her character isn't portrayed well and developed according to its premise and nature. I found the music varied and well-executed. It perfectly highlighted what was going on in the single scenes. The voice acting is superb, it has to be when rakugo plays such an important part in the anime. The animation is also of a high quality. Character designs, facial expressions, backgrounds, colours - no complaints about any of that. In conclusion, it's an anime for adults I certainly recommend.

What I Liked: Characters are memorable and interesting, presented as complex but flawed individuals. The interpersonal relationships felt real despite dramatisation. Soundtrack was perfectly emotive, eclectic and nearly always utilised to its full potential. Animation was smooth, with great attention to detail in character movement especially in the rakugo scenes. Great set designs. Skillful cinematography and direction throughout. Akira Ishida and Kouichi Yamadera gave some of the best vocal performances I've heard as Kikuhiko and Suteroku respectively. Both the Opening Theme and Closing Theme. What I Didn't: YMMV on Miyokichi's characterisation - I'm still in two minds about her myself. Some people might find the use of a frame narrative a little disconcerting initially. Final Verdict: As complex and theatrical as its subject matter, Shouwa Genroku Rakugo Shinjuu is a enthralling character-driven drama told against the backdrop of major societal (and, for the characters, personal) change. It's presented in a flawless manner from the graceful character animations and art direction to the jazz-tinged soundtrack and stunning voice acting, serving as the perfect vehicle to the story and its nuanced characters. I thoroughly enjoyed watching the evolution of Rakugo and the ups-and-downs of the main characters' relationship, and highly recommend it. On my Favourite Anime of All Time list. 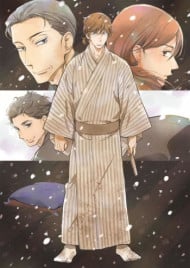 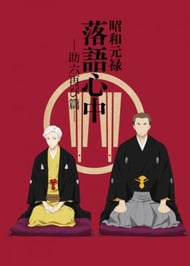 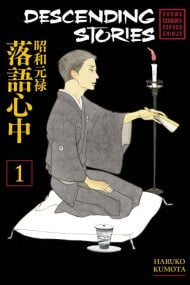