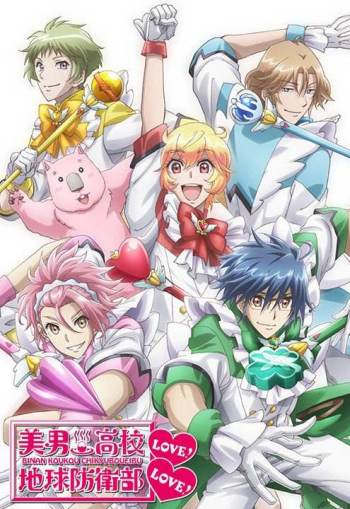 If you're looking for anime similar to Cute High Earth Defense Club LOVE! LOVE!, you might like these titles.

Time has passed since the war involving the curvaceous Papillon Soldiers, and much of the city has been destroyed. A new start means a new job in a lingerie bar for Tsubomi – the alter ego of the superhero Papillon Rose. The buxom babe, along with her Papillon colleagues Anne  and Shizuku, have lost their memories in the aftermath of the war. Soon, a new enemy appears in the form of the Susanoo sisters – three aliens who bring devastation and a variety of sexually-deviant monsters. Earth’s only hope is Rama, a panty-obsessed cat who has the power to help return the Papillon girls’ memories. Will he help them remember in time, or is Akihabara doomed to be overrun by these risqué invaders?

A world plagued by alien invasions needs heroes, and what better choice than three girls in elementary school? After all, it's best to fight fire with fire, and the super-cute aliens have met their match in the super-cute Mao, Misoria, and Silvia. With character design by Akamatsu Ken, the creator of Love Hina, this series aims to amuse.

Tsukuda Mina is an average high school girl who has been given the chance of her dreams: to be an announcer on her favorite sports news program, Spoluna. While covering her first big event, the baseball stadium is attacked by aliens who happen to love sports. Mina learns that she is not such an average girl after all when she discovers she has the powers of a member of the Rabbit Force, a group of magical girls who are responsible for protecting the Earth's sports and defeating the aliens who threaten them! Now Mina must find a balance between her new responsibility as Rabbit Force's Tsukishiro Mina and performing her dream job as a sports announcer.

"Love makes a girl stronger." Saki Uno is working hard as part of the new idol unit, Magical Twin. The one she admires most is Mohiro Mikage, who’s the older brother of her idol unit partner Sakuyo, and he’s also a member of the top idol unit STAR☆PRINCE. She would be willing to do anything for him, and one day, those feelings brought on a miracle. Saki ended up turning into a magical girl when she strongly wished to protect someone... But what she turned into wasn’t exactly what she was expecting...

Minki Momo is a teenage magical princess from Fenarinarsa, the mysterious land of the dreams in the sky – a place where all fairy creatures live; but because humans have less and less place in their lives for dreams, Fenarinarsa is bound to disappear. In order to prevent that from happening, The King and Queen send their daughter to Earth where she is to live with foster parents and give back hope and imagination to the people. With the help of Sindbook the dog, Mocha the monkey, and other friends, Momo will use her ability to turn into an adult and her charisma to win over humanity and restore its faith in dreams!