Amina of the Lamp - Recommendations 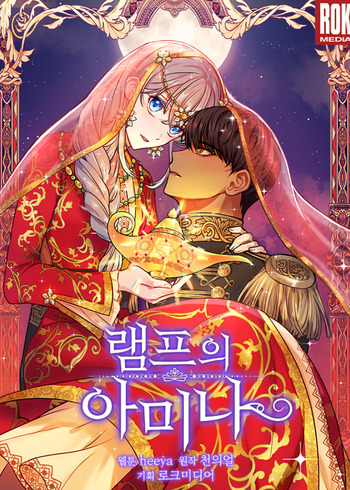 Kate Smith enjoys her quiet life as a maid and has no interest in getting married. Her resolve only deepens as she watches her peers swoon over the moody manservant, Ian. Whether it's fate or bad luck, Kate quickly finds herself in a series of compromising encounters with him. One day another maid goes missing and the mystical happenings that follow only intensify her suspicions about Ian. As the expert detective Jade Killian comes into town, can he help her uncover the truth?

the main characters shares the same vibe, the ml are not too chatty and the fl are no wimps.

other similarities include having the mc go along with the ml due to certain events, then they settle in and work for them.

The mangas are very similar; between the rivalry of brothers, the female protagonists postion, and, of course, the romance. Both Amina and Princess Nakaba, esepecially their circumstances are  indistinguishable. The settings are very alike (and the art is very detailed, Amina of the Lamp is in color) both are very good reads that i reccomend earnestly.

The Lady and the Lion

Young, willful Princess Hilna longs to do what boys can do: ride wild horses, practice sword fighting, seek adventure. But her strict father and spiteful stepmother see her worth as nothing more than an accessory for her future husband. Then she meets Latio, a brash and mysterious warrior prince, who seems to be the only one who truly understands her. Their intertwining fates take them down a path of ruin and betrayal as dark forces bring two empires and a kingdom to the brink of war.

The time setting and how people dress are really similar

If you like long political plots with a bit of romance

Both are more plot driven than just clique romance

Both fl are strong characters who want to protect their country

I Can See Your Death

After an accident, Eshana Ash has started seeing people’s lifespan. The date and sign of the person’s death would appear above their head. If the letters were black, she could help, and sometimes save the villagers from danger. “It’s better not to go to the lake today. It’s too cold for going boating,” she said. That man was to die today by drowning in the lake. She saved many of her people this way, so whenever she did, the people in her village would gather around and praise her and would tell her. “You really must be a child from heaven!” Well, I’m not particularly blessed to see death. However, if there is something that cannot be changed, it’s the lifespan shown in red. “Save me.” 422 years of the imperial calendar, a peaceful evening. A bloody man lying in the front yard of the house. And clearer than that blood, is her lifespan. [427/Sign: Eshana] Why is my name there?

The second season of It Was All You.

It Was All You

In a near-future Pyeongyang, clones have become an indispensable part of human life. Tasked to test XYZ Corporation’s latest prototype, biomedical engineer Dr. Yuri Lee is marveled by LPC-6, a physically perfect and intellectually superior clone designed for a single purpose -- to give unconditional love to his master. As she uncovers the depths of her unfaithful husband’s depravity, she finds solace in “Victor” and his extraordinary capacity for empathy. Will her desire for retribution and love set her onto a path of no return?

Matsuri finds a magic mirror, a genie appears and offers her three wishes.

One day, Yosugara, an antique shopkeeper, met the cute little girl Riu. However, Riu can't go very long between sleeping, and can't control when she falls asleep. Then the two come across a genie trapped in a lamp, and break the seals that bind him there. The genie, Lample, can make your wishes come true. However, in return, he requires the life force of the one making the wish. So Riu enters into a contract with Lample, but what is her wish!?

The Thorn That Pierces Me

After touring America in an attempt to start a new life, Heesoo boards a plane back to her homeland of Korea. She soon realizes that it is not so easy to escape her unfortunate destiny when the plane spirals out of control and she is warped to a strange world that is distant from Earth and full of zombie-like creatures called “maenok.” Luckily enough, she is unintentionally rescued from a dire situation by an elegant and refined gentleman named Calix Clovis, who possesses the mysterious ability to wield a blue flame that can kill the maenok. He is a chaste paladin who has sworn his body to the Church, but Heesoo quickly notices his physical reaction to her naturally seductive charms. Will she succeed in surviving by using her feminine wiles to win over Calix’s heart and body?

Judith, a war orphan of a defeated nation, concealed her identity and exiled to the federal state. She has an anonymous supporter, whom she never met or knew his name, age, or how he looked. On one summer day, five years after she sent her letter to her anonymous supporter, once a month with gratitude, she received a letter from him.