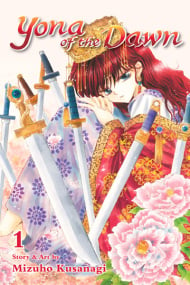 SPOILER FREE REVIEW For those who are considering reading it or just checking it out. //IMPORTANT NOTE: This is a review coming from a fan of the manga and its creator (Kusanagi Mizuho). Although some parts may be a little opinionated, I will try my best to make this review as unbiased as possible. STORY:        Princess Yona is forced to flee the palace along with her bodyguard/childhood friend Son Hak due to dangerous circumstances. They set out on a journey to find the legendary dragons to help save and restore peace to Kouka.         The beginning of Akatsuki no Yona (or Yona of the Dawn in English) is pretty much your typical historical-romance drama. You have a pretty princess in an enclosed palace with her 16th birthday coming soon and under the pressure of marriage (and of course there is someone whom she already loves but can't marry), but the palace gates are breached and the princess is forced to flee the palace.        Honestly it may not seem very unique, but something about it makes it such a great manga. Historical themes are somewhat complex, but Akatsuki no Yona is presented in such a way that we can all understand despite all the kingoms, places, and characters. This manga is also very well-paced. Everything is explained when needed without it being too long and texty. The arcs are neither too fast paced nor too draggy.                                                                      (you can see that even the kingdom was well thought out)        Akatsuki no Yona perfectly balances action, drama, comedy, and romance. It is full of emotion and suspense, but also has the right amount of comedy (and some fan-service) to give your aching heart a break. ART:      Kouka is actually a fictional kingdom set in (I assume) a mix of historical Korea and a bit of Japan. There is much detail and design to take into account, and Kusanagi Mizuho's (god-sent) art is perfect for this. Her art really captures the whole mood of the story, and Akatsuki no Yona wouldn't be the same without her art. She is a very skilled artist, and she makes Akatsuki no Yona so visually pleasing.       Remember that this is a historical-shoujo, meaning you are bound to come across a handful of battle scenes. Akatsuki no Yona is action-packed, and Kusanagi Mizuho doesn't hesitate to throw in some blood and violence which is very crucial to the historical aspect of the manga. Her art is very dynamic (especially in the battle scenes) and it makes it seem as if you are watching a movie.     The character designs are wonderful and all the guys are so good-looking. *wink wink* This is Son Hak. I'll only how him as an example because you have to see the others for yourselves!!!                                                                                              ( ANYWAY, CAN I GET AN AMEN??!??!)  CHARACTERS:         Okay, stop staring at Hak. Let's get down to business! (to defea--) I've mentioned the wonderful character designs already, so in this section I'll be talking about character development and stuff like that haha. I know many of us are suckers for the looks, but let's talk about something else for now, shall we!?!?!         You may have seen a character/characters similar to Yona before, (personally, she reminded me very much of Nakaba from Reimei no Arcana, or Dawn of the Arcana) but what separates her from the rest is how her character was developed. She may seem like the typical damsel-always-in-distress type heroine at first, but thanks to Kusanagi Mizuho's great writing and art, you witness her personality changes and grow to like her more and more. (WARNING. OPINION.// To be honest, she is one of the handful of shoujo heroines I love and respect, as many shoujo heroines tend to get a bit annoying and useless sometimes. I personally think Akatsuki no Yona presents the best heroine character development I've seen in shoujo manga so far. )          Sometimes, characters in other manga tend to develop too fast or not at all. Each event in the series really contributes to the development of each character. What's also great about the manga is that each main character has his/her own backstory, development, and this makes no one seem distant. It makes you feel as if you personally know each character. (This adds to the heartache. I kid you not, you really need to prepare your feels.) CLOSING:          I'm really sold out for this manga not just for the art, but also for the whole story and each character. This manga has taken me on an emtional rollercoaster and some chapters leave me either smiling, on the edge of my seat, or just like Yona here.        I know the anime has been out for quite while now. The anime is great, but personally I think nothing beats the manga. I recommend reading it first before watching the anime! The experience is wonderful!  Anyway, I highly recommend this manga. Hope this was helpful! Thanks for reading!

This is my first ever review but I felt like that this one needed one. ( My brain is a bit tired, please forgive my poor writing and lack of proof reading) Typically I stay far away fromromance anime and manga due to the fact that the entire plot seems to be focused on the romance itself everything takes back burner. This however does not do that. It is the plot that sucked me in and the main character too. I think I too am in ove with this manga's main character! Any how joking aside I think Yona is one of my favorite characters of all time. She is a very dynamic character and her changes are for the positive. I am so tired of female main characters that are useless and this is the story about amain charactert that decided she wont be useless! I am reading this to watch Yona's transformation fromthe sterotypical useless girl that all the men are in love with to a woman who can command her own respect and stand on her own two feet. Any how I am a bit tired, I just wrote this review because I am pretty sure the whole reverse harm/romance tag would turn readers such as myself away (it turned me away until I was so bored it was all I had to read). The thing I dont like about this manga isThe only thing this manga is missing is a woman fawning over the main character. While that would be nice that isnt actually the draw back of this. The draw back for me is the fact that it does have that stero typical rmance bs that writers are so fond of. That one where every time the romantic interest tries to lay out their feelings the one they are confessing to (The one that you knowthe feelings are mutual) mistakes what is being convayed or some event just so HAPPENS to inturrupt. After a little while it should be obvious and like they should just hook up because the rest of the plot would still happen if they did. (I dont particularly care for the teasing romance writing. It irritates me)

i had never read a manga before this one, the anime enthralled me. it's really funny and sweet but also very tense and dramatic. the art is so pretty, i have physical copies on display. i suffered heart damage from the excitement of reading this manga with an unassuming start but a wonderful progression 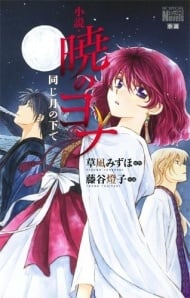 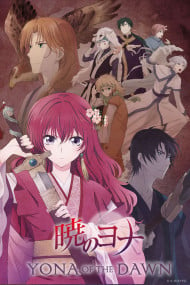 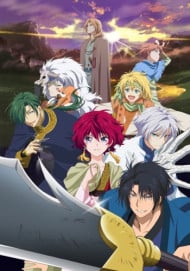 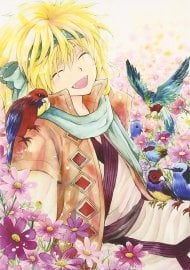