Amina of the Lamp 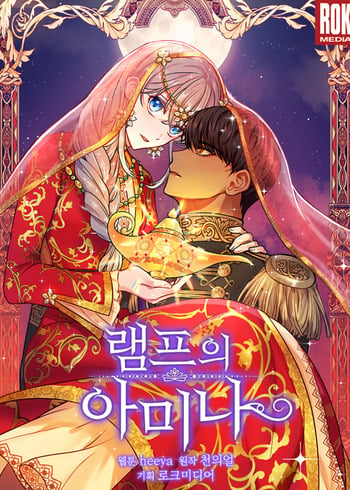 Intriguing take on the jinn mytho  and a much needed one after the monstrosity that was Aladdin 2019  Amina is a mage (a group of a people who can do magic)who lately they are in much less number than they used to be, for reasons still undisclosed this evoked a civil war where the non mages attacked the mages palace and killed everyone except Amina and her brother who saved her from death by transporting her to a different location with lamp, Amina incants a spell on the lamp which, unbeknownst to her makes her into a jinn or a jinn like creature that can be summoned with the receives the summoner's blood. In the current timeline a lot of time has passed since these events occoured so nobody remembers the civil war that broke out in Amina's original timeline and she is summoned by the prince Jackal (bear with me) who even though doesn't want the throne can't rescind his name in fear(?) Of his step brother he also doesn't have anything he wishes for so for the time being he asks Amina to stay with him until he figures it out the two wishes  (the first one where he wished for rain in the desert)

Overall the plot is pretty good, the characters have realistic motivation and the art is amazing, what's more is that the authors keep you wanting for more the mystery of Jackakal's father's coma and what happened to Amia's brother.

The only problem I have with this manhwa is with the skin complexion of Amina I don't understand why she's so pale when the entire thing revolves around pre-Islamic Arabian and Islamic mythology? Maybe cause she's a mage? Maybe cause the aesthetic? Or the contrast between fair skinned heroine and dark skinned hero? Or maybe because it's a Korean manhwa based on Arabian mythos and people are having fun cause it's not that deep and I'm reading too much into it as I have been told by people but either way it bothers me so if you can ignore that this is a pretty solid read.