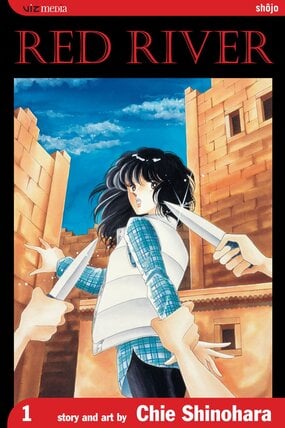 I absolutely LOVED this manga - I mean it had everything a reader, well at least a female reader, would want: a physically and mentally strong female charcter, extreme and real romance not bullsh*t romance that defys the laws of space and time, I MEAN COMEONE MIRAI NIKKI (I advise you don't watch or read Mirai Nikki as it will simply take away hours of your time and then end leaving you with so many plot holes and questions that your brain will reset itself trying to adjust to the sh*t that it has just been blasted with) and finally a manga which has an adequate amount of chapters enough to keep you entertained for at least a week, if you don't stay up all night reading chapters in which a week will turn into 3 - 5 days. Plus the fact that the plot was superb - I mean girl being dragged into another era due to the plans of an evil sorcress and then falls in love with the mighty prince - it's like a princess plot but a million times better and the girl isn't the one waiting for her prince charming. I'm just thinking if I had to name the best character in the whole manga who would it be cause although Yuri was badass and wasn't useless like some other female manga characters, SAKURA (from Naruto), you still got to admit Kail (sorry but I haven't read the manga in a couple of months but I still remember what happens and the plot of it but just not the names so if it isn't Kail soz) was pretty badass too with the way he defeated his "mother" plus you've got to admit that he did act as big part of the manga I mean the way he deeply cared about Yuri so much so that sometimes that he would even get a bit possessive of her which added a lot juciness to the manga. Anyway I got to say though this is one of the best manga that I have ever read they should really turn this into an anime, if it isn't already one, do you know how awesome that would be? Damn, I am so tired right now, but still got to complete that project due for tomorrow (last minute homework), so I'm gonna stop. Peace Out.

This story is beautiful. The plot is good and the arcs are masterfully handled in a way that doesn't make them seem rushed or forced. The characters seem pretty solid already in the beginning, but their development is natural and raw. They struggle with their emotions, with love, and with the weight of what war truly is. It's closer to the heart than just some faraway battlefield. This doesn't romanticize the brutality in any way. The characters in this story struggle a lot, especially Yuri. She struggles with guilt of wanting to stay in a world she was forced to belong in, and the guilt of wanting to leave the people she's connected with behind in exchange for her old life. I love that the people around her allow her decisions to be hers and hers alone. They give her the freedom she needs to mature and grow into a responsible and fair woman. The art is immaculate. The attention to period clothing, natural skin tones, and scenery is appreciated. Too often I see historical type mangas that have modernized clothing styles for the sake of being "progressive" but that damages the overall effect of a historical peice. The art style doesn't impede on showing these differences and allowing the different cultures to shine beyond assigned colors and hair types. The diversity even extends beyond the art and into the dialogue, accents and language barriers are presented, they are used to further story arcs and resolve issues and I think it's a very cleverly used tactic that can often be overlooked in worldbuilding. I aslo apreciate the attention to detail in terms of political climate of the surrounding countries. The names, families, and dynasties are all correct and each place is handled with respect and care. Worldbuilding is difficult, it's hard to put your thoughts into words when all it's ever been is the images in your head. It's even harder to build a world in the pre-existing conditions of the past. Yes, most things can be left up to interpretation, but only to an extent. The romance is also top-notch. It's not exactly a slow-burn, but they do take the time to actually develop a connection beyond a zing. I apreciate the push and pull they have with each other. They push each other to be the best they can and when the other trips, they're their to guide them and pull them along until they get their bearings again. It's a very natural feeling relationship. Song recommendation for this manga is: "Lover, Please Stay" by Nothing But Thieves

I found out about Red River from the Anime Planet homepage under "Random Manga", so for me, it was like finding a hidden gem among thousands of other manga. Red River had everything I was looking for in a shojo romance manga, so I hope my following review will help you if shojo romance is your thing. Story: Red River, in my opinion, has a Cinderella dynamic in which there is a normal girl, a prince, and a wicked stepmother. Yuri is an average girl from Japan, who is transported to 14th Century B.C. by Queen Nakia, the Tawananna of the Hittite Empire. Queen Nakia is hell bent on having her son, Prince Juda, on the throne, but there are many other princes ahead of him. If Nakia is able to slit Yuri's throat, and drain her blood, she will be able to cast a spell to eliminate all of Juda's competition. Through some circumstance, Yuri, who in this world is thought to be the reincarnation of Ishtar, the goddes of war and beauty, ends up meeting and becoming Prince Kail's (3rd prince in line) sole concubine. Kail does this to protect her from Nakia and from there, various plot twists, love triangles, and character development contribute to an excellent story. Kail is able to return her to Japan, provided the following conditions are met: she is wearing the clothes she arrived in, the springs are full of water, and the star of Ishtar is visible in the night sky. Characters:Yuri - Generally, shojo main characters are hit or miss as to whether you like them or not. I liked her, but she came off as a little bit too perfect. Yuri is surprisingly capable of managing wars, infiltrating behind enemy lines, and figuring out the next tactic by Nakia. She excels at being a goody-two-shoes & commander in chief of the Hititte Army. She's strong willed, stubborn, and is able to warm the hearts of practically everyone. She does, however, experience setbacks that make her grow as a character. Yuri is seen by the people as the reincarnation of the goddess Ishtar, which does it's part in contributing to explaining her success and perfect-ness throughout the whole manga. Kail - Sexy. Mysterious. Politician. Playboy. Before Yuri meets him, he was pretty much banging everyone in sight. He swore to himself he would never have a concubine other than his wife, and would love no other. So when he takes Yuri under protection, it creates a bit of a problem. He is plagued by "I love her, but I can't have her, she doesn't belong to this world", which prevents him from being expressive about his love her Yuri. He can control air, but does not make use of this power. Nakia - She was a Babylonian princess who was given/"sold" to the Hittite emperor as a concubine after Babylon was conquered in exchange for monetary aid. She felt lonely, and she hated Babylon for forcing her to do this. She can control water through elemental magic and uses this power frequently throughout the story. She is driven by her desire to see her son, Judah, on the throne, so much so that she schemes and causes the death of many people. It is because of her constant scheming that the story is as amazing as it is, it keeps you guessing, and keeps you turning the page because you want to know her plans for what she is doing. Art - The art was actually pretty good. Given that this was a story about royalty, many of the scenes involves royals with ornate jewelery that, you could just tell required a bit of time to draw. If you like historical fiction, you will love this because many of these characters are confirmed to have existed. The manga actually plays out battles that took place during this time, as well. Some of the more well known historical figures, such as Ramses, Homerheb and Nefertiti make appearances. The story arc with Kail's brother, Zannanza, is actually documented to have occured: http://en.wikipedia.org/wiki/Zannanza Very good read, highly reccommend reading this.