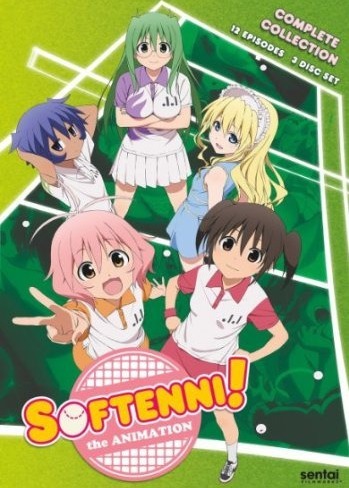 Story: It's about a group of girls that play soft tennis, which is played with a soft sack or a soft ball and they smack it around a court that is just like a tennis court, but with a squishy sack instead of one of those tennis balls. And with any other show about a group of adolescent (Teenage, whatever, school girls) girls, they do shit that may or may not have to do with whatever shit it is that they're suppose to be doing, be it band or popping shots with guns. What really pushes the envelope in this staple of the "girls doing shit" genre is that they are playing soft tennis, a sport that nobody knows or plays because there's tennis and that's better. Because the hard ball for that ball smacking sport is more hittable than a soft ball. With that said, it sucks balls. They do the usual shit for a sports club of adoles- young girls: They go to a camp retreat- I mean training camp where they train, they go to the beach, they go to the hotsprings, they sometimes play soft tennis, more often than they should considering the genre but mostly it's dreadfully dull with some tasteful nudity thrown in because why the fuck not. Tits man, except for Greenie, the rest of the club girls are pretty much as flat as a board, barr a few B-Cups. I know this sounds creepy but let me tell you, there's still some adult nudity thrown in and it's as tasteful as can be because she has tits to flaunt. Still creepy, yes, but to go along with the nudity and sliding scale of titties is Pinky's (There's no way I'm remembering the name of any of these bitches, they all have different hair colours so you wouldn't get lost) constant and episodic episodes of rampant sexual delusions. If someone says something even remotely dirty or can be taken in a smutty, sexual context, she'll imagine it and jack off to it. She'll find some way to perv it up. It needs a perverted, ecchi edge to counteract the soft ball playing. I got side-tracked from the ballsucking part but it's for a most part boring. Maybe it needed more titties, or some thrills or some shit. Maybe it needed more of the other team's manager (There's like... two other teams, one of them has a manager. I'm being as specific as possible) doing massages or the girl of the other team simply appearing (The one that kicks ass in soft tennis). Hell, more of the secondaries! They were more interesting and tolerable than these bitches on the main soft tennis team. It does manage to spice things up with new characters but I need to say this, and it spoils the last episode or last two episodes or whatever, it spoils the final episode at least: Beware of them spoilers It does that drama shit, where it digs deep down to do some tragic shit. Considering the beginning of the episode, it must have been a parody because if that beginning was the cause, and I may have missed some of the subtitles due to not giving a shit, then it is fucking retarded and I mean seriously fucking retarded. End Spoiler of how fucking retarded it gets Man it's hard to give two shits about what happens, I know it's "girls doing shit" but you get so little emotional investment as it goes on. Excitement or joy, emotions like that. You get nothing. It has it's perks with the salamander and shit and I do admit that I got a laugh now and then but not nearly enough to make it worthwhile as a comedy. The more I try to write about the story the more depressed I get. At times it's stupid, it shines when it's with the secondaries and the club is full of bitches. Bam! Done! Animation: It's bright, colourful, cheery and there's titties. Felt like I had to mention the last part for animation. It's simple and easy to look at but nothing special. Like the large amount of short-haired gals, always a plus. And an extra point for a shot of the starry sky, which must have been ripped from another show entirely for being so damn gorgeous. Sound: The OP had lyrics that were either nonsensical, about hitting balls, smacking balls and giving your balls their all. Now that's classy. EP I skipped, voices I'm indifferent and I'm just a 5. Characters: I nearly broke down into tears when I came to this part. Straight up, again, I don't give two shits about them bitches from the main club. Not even a single shit. The secondaries are where it's at, from Magic Hands to the Manager of the main club, that girl who kicks everybody's ass at the game and is obviously the best girl with the best butt, secondaries secondaries secondaries. There wasn't enough of them and we don't get much on them but they're better overall and deeper than the main gals. God I hated the main girls. Overall: It was shit. They may have played more soft tennis than PPC did in ping pong but it doesn't make it half-way decent. Boredom, cliche antics, generic character traits- character staples, like how the quiet foreign-looking gal has those outfits or exhibits extraordinary strength, tedious at times and just not that fun overall. Lackluster nudity and not enough salamander porn.

The STORY of Softenni follows a group of young girls and their aspirations for their soft tennis dreams - mostly, to make it to nationals. (Or to Wimbledon - which can't be done). The cliches in this anime are overdone - especially the amnesia arc. This is a sports anime with a lot of forced ecchi and comedy thrown in between to try and spice things up, but unfortunately it fails to deliver. The ANIMATION is very cartoon-y and really, quite awful.  The background is normally a blur of a scenery and it looks as if the animators created this in one day.  The character designs are pretty diverse enough not to confuse each other with, but there were two particular characters that had nearly the same character design and I would always get confused when I saw them. The SOUND was actually not horrible for this anime.  I didn't mind the music added into each scene and the seiyuu's were decent.  The OP made me want to jump off a roof.  I'm not kidding.  I played it so that I could listen to it and my mom even got mad because it was so annoying.  THE Ending song was pretty decent, though. The CHARACTERS... oh my gosh, I don't even know where to start.  They were just awful, in my opinion.  There's nothing wrong with re-using character types if it is done well.  But nothing about this was done well.  I did enjoy the interesting relationship between Kotone and Misshi, and Kurusu could be funny on occasion with her strange outfits, but that was it.  I maybe laughed once. My PERSONAL ENJOYMENT of this series falls into the negatives.  I was so incredibly bored that I found myself doing other things online sometimes and then having to backtrack to make sure I didn't miss anything in the anime.  Once I realized there was nothing to miss, I stopped backtracking. OVERALL, I would never recommend this anime.  Ever.  Maybe that's a bit harsh, but in my opinion, everyone should stay far, far away. 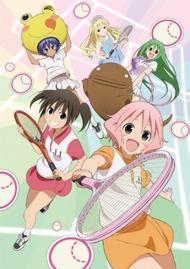 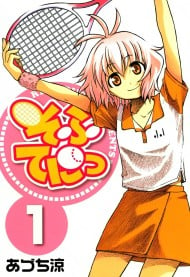