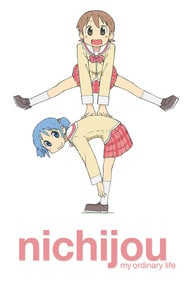 I’m not going to write a traditional site review for this show. There are already plenty of those. What I want to emphasize in this review are the things that make Nichijou different from the other major slice of life shows. The series at first glance Nichijou may seem like a clone of other popular slice of life shows such as Azumanaga Daioh and Lucky Star, but while it borrows elements of the traditional slice of life format, it’s the difference in  the details and presentation that sets this show apart from the rest. 1.      It’s NOT just cute girls doing cute things In fact, Nichijou’s girls have flawed designs, which make them more them more rounded characters than those in most slice of life anime. Mio is a spaz, Mai is an outright troll, Yuuko is an idiot without any sense of tact and dignity. All of them get legitimately angry at each other often usually appropriately in response to something stupid that one of them did. They’re friends, but they aren’t always some unified unit that’s facing against common problems. Many times the conflicts are caused by each other. Sure, other anime will have episodes where the main group has their friendship tested, but in Nichijou these conflicts seem to occur every episode. This allows for some hilariously over the top moments as well as a stronger bond between the main characters.  2.      The pacing of the jokes is (nearly) perfect The structure of a joke consists of three parts, a setup, a link, and a punchline. The art of timing is to assign an appropriate amount of time to each phase of the joke. What many slice of life anime suffer from is spending far too long on the setup for a rather weak punchline. Nichijou has a strong understanding of how much time to spend on a joke (unlike Lucky Star where they would spend a good 5 minutes setting up a joke that didn’t pay off at all). They don’t hesitate to utilize the episode time on completely tangential short segments that last 10 seconds or less. The show does set up longer jokes as well, but the pacing is much more rapid than most.  3.      The jokes are more universal This point is rather simple; Nichijou doesn’t rely as much on Japanese cultural references or language puns. The style of humor is so far out there that it doesn’t really rely on any culture. Rather than relying on cultural anecdotes, it takes the universal and then exaggerates them to outrageous proportions. Really, Nichijou’s style of humor can really be summarized by this scene. It’s really a show wired for a cult following. Some will love it, some will not get it, but that’s usually what happens when attempting to create something unique.

One word to describe Nichijou is simply random, but i would like to say it was a very unique experience in itself and once you got past the sheer randomness of it you start to realize the comedic nature of it. Story:Basically there wasnt much of a story. Nichijou can best be described as a set of random shorts where we get the points of views of the main characters but get little comedic point of views of the side characters as well. Animation: The character design was nice and simple but the animation its self was really well done and its none less expected since it was done from Kyoani. i found it pretty unique. the art style really fit the characters and the way all the random and crazy stuff was animated was very entertaining to watch. Sound: I thought the sound track was nice and all the voices were done very well. it definitely does vary by opinion, but i thoroughly enjoyed both openings a lot and enjoyed both endings as well. i found it a pleasant surprise to hear a version of Tsubasa Wo Kudasai at the end of episode 14. Overall i thought the sound of Nichijou was pretty good. Characters: Nothing much to say but that i found most of them entertaining and unique in their own way. Some were pretty fun while others were obviously just there for random skits, but overall i liked the characters Overall: In the end i really ended up enjoying it and felt a little empty once i finished it, i have to say it did take me a couple of episodes to really get into it but in my opinion its just a solid random slice of life comedy. 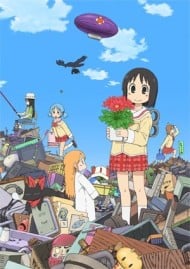 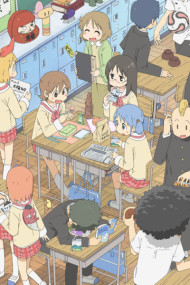 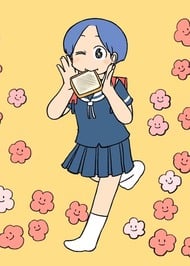 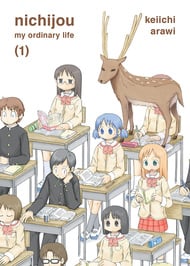