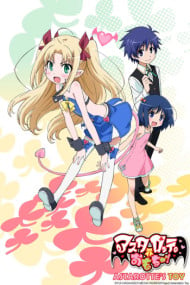 Lotte, the princess of Ygvarland, hates men - a fact that ordinarily wouldn't be a problem given she's just a child. There's just one issue: the girl is a succubus that must suck the life seed from the male species or die! Now approaching adulthood, Lotte must learn to tolerate the opposite sex, but her royal highness won't have any of it. That is, until Judith, the girl's lady-in-waiting, brings Lotte a human boy to the demon world. This unfortunate young man, Naoya, must now open the princess's heart to his gender, but as caring and considerate as he may be, he'll certainly have his work cut out for him!

Despite the obvious flaws of this series, it's genuinely one of my favorites. Most people are immediately turned off once they read the words "ten year old succubus must drink semen to live." Which they should be. But if you actually give it a chance - which it seems most people don't, judging by other reviews I've read - it has a far more cohesive story than most ecchi. I actually forgot this was an ecchi, as there was barely any nudity. The story is clearly something out of a hentai manga but that the powers that be decided could be given more depth and less sexuality. Astarotte is a ten year old succubus, and as she is nearing puberty, she must prepare to start engaging in sex acts in order to keep herself alive. However, she is afraid of men, as she witnessed her mother having relations with one of the men in her royal harem as a child, thus ruining her previously happy and loving relationship with her mother. One day, she decides she wants a human for her harem, as humans are something of a myth in her world. In comes Naoya and Asuha Touhara, a 23 year old father and his 10 year old daughter. As you can probably tell, whoever came up with this premise probably either didn't bother to do the math or just didn't care. Naoya fathered Asuha at age 13. It's completely uncomfortable and improbable, but nobody else seems to take notice. Beyond this, it's essenitally a fantasy/slice of life. Astarotte has a crush on Naoya, which causes her fear of men to dissipate almost immediately. Another thing that tends to bother people is that Naoya is billed as Astarotte's love interest, but if you actually keep an open mind you can clearly see that Naoya has no romantic feelings for Astarotte. He wants to help her have a happy childhood despite the traumas she faces in relation to her mother. I see Naoya as more of an adoptive father for Astarotte. It bothers me that the series often tries to sell them as a couple, but it's easy to see past if taken with a grain of salt. I really enjoyed the animation in this series, especially the way the eyes were drawn and the way Astarotte's hair was drawn with individual loose hairs. It wasn't revolutionary or anything, but I've always liked the way it looks. Most characters in this series were fairly flat. Astarotte really resonated with me as a character, but that may be because I too have a strained relationship with my mother and face frequent turmoil over the clash between my dislike of sex and my physical needs. To people who can't relate to Astarotte, she probably just seems like your standard tsundere. I also happen to have a soft spot for Sigurd. From what I've seen, most people just think Sigurd is a weird pedophile stalker, but there are scenes that show that Sigurd genuinely cares for Astarotte and doesn't just want to get in her teddy bear boy briefs. Plus it's a little less creepy of a relationship than if Astarotte were to date Naoya because Sigurd is a teenager instead of a grown man with a ten year old daughter of his own. Honestly, I think this anime would have been a lot more popular if somebody had done the math on how old the characters would have to be for it not to be extremely uncomfortable. I wouldn't even mind if the age gap between Astarotte and Naoya had been the same size, had Astarotte been 18 and Naoya been 31. It would also help if Asuha were younger than Asarotte, considering the two of them are both ten and have the same mother, meaning they would have to be twins despite having two different fathers. I really wish this series were more popular, so that I could do a parody where the characters go on Maury. But it's not, so I'll just go try to make fun of something else I love.

This anime is yet another pedophile porn show, dressed as a romantic comedy. The reason is clear if you see Rie Kugimiya in the voice acting cast; she is voicing nothing else but loli tsunderes in romcoms. And it’s not like the similarities end just with her name; the entire show is basically a rehash of the anime she gained her fame in the past. “Meek boy summoned to a magic world to serve as butler a rich spoiled loli tsundere” is basically a fusion of Familiar of Zero with Hayate no Gotoku. And just like those aforementioned anime, Astarotte no Omocha has very little plot and lots n’ lots of jail-bait. To be completely honest, this anime is far better than the other two, no matter if you hate or like such shows. If you hate them, it lasts only 12 episodes thus your suffering ends much faster. If you love them, it is far more perverse and bold thus you are going to have much better boners out of it. Allow me to describe the story to you. Please be warned that I am not joking at anything that follows; this REALLY is the story. The setting is a magic land based on the Nordic mythology. It doesn’t look like a place full of brute Vikings and scary frost giants; it just borrows the names and basic functions of the Yggdrasil, the world tree which connects all different realms. In fact, it look more like a fairy tale with four leaf flowers endlessly falling from the sky on top a land filled with animal featured cosplayers. Meaning, it looks like a virtual brothel for otakus. In this land, the princess of the land is Astarotte, a 10 year old rich spoiled tsundere loli succubus. Since she is a succubus, she reaches an age where she needs male life seed to survive. And by life seed, I mean semen… Seriously; I am not making this up; the loli princess needs to suck semen in order to survive from the age of 10. For this reason her assistant hires a young boy from our world to be transported there and be her butler. Meaning, her sex toy and regular semen provider. Said boy is 23 years old and already is the father of a 10 year old girl who loves to run around without pantsu. Her mother is actually the same as the succubus’, meaning the boy impregnated her mother when he was 12 and now came to “do” her too. And if you expect some really sick incestuous lolicon hentai from all this I’m afraid you will be disappointed; the plot “sucks” harder that the loli. Everything that follows is just plain old random gag and slapstick romcom, usually centering on the words “milk” and “suck”. Well, you can imagine what type of jokes they are… The last two episodes attempt to provide a sort of crisis and resolution with the worlds being in peril because of the sudden interaction of the realms; a thing which I feel was ripped off from Ah! My Goddess. Yet the resolution is the usual open ended finale where nothing much has changed. In fact, nothing did since episode 1.So there you have it, an incestuous lolicon hentai premise that heads nowhere, with its cast being caricatures defined by their erotic fetishes. If you are willing to be content with that instead of reading some ACTUAL lolicon manga, then be my guest and fire away (your life seed). As I said it is far bolder than the other two anime and has Rie Kugimiya voicing a tsundere loli; what else is there to expect? I am rather surprised its score is lower that the other two since it is far closer to what we expect from such shows. I guess the rehash of such stories got boring and Kugimiya-based anime are now pitted against Toradora, the best romcom she has been in so far (she voices Taiga there). The production values are not good in overall since the animation is jerky and heavy on SD characters and simplistic backgrounds. Heck, even the world tree looks like a crude 3D cone with a dry scalp that flakes all the time. And the characters are all drawn simplistically moe and sexy with outfits from some nekomimi maid café. But who cares if the fan service is good; right? There are lots of nude scenes, as well as pantsu and nopan ones, most cleverly censored with passing by items. That is almost a talent! As for the soundtrack it is full of silly songs I have already forgotten, and voice acting is expectably high pitched voices, since Japanese people believe squeaking squirrels are sexy. Heck, even the main male is voiced by a girl. In all, I liked the bold humor and disliked the absence of EVERYTHING ELSE. There of course no value in this anime, the characters are just ephemeral fapping material, the story goes nowhere and the production values are cheap. But hell, chances are you only care about the first thing I said; so be my guest and allow yourselves to be entertained by a 10 year old “suck”ubus. You can also allow the anime industry to “milk” your wallet or just look for a torrent with lots of “seeders”.And enough with the puns; overall this is not a good anime… 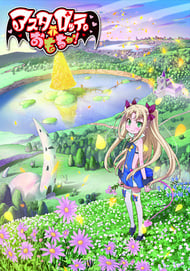 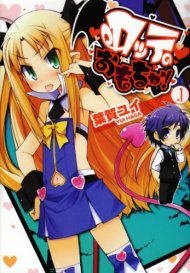