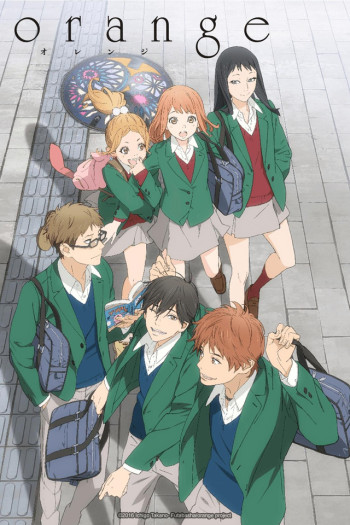 It’s the spring of Naho’s second year in high school, and Naho receives a letter from herself, 10 years in the future. The letter accurately depicts what’s about to happen, including details on a transfer student from Tokyo, Kakeru Naruse, who ends up sitting beside her in class. On top of that, the letter also begs Naho not to invite Kakeru out with her group of friends on that day alone, but why?

These two have similar charchters.. also the main charchter struggles to find her way to tell her love about her feelings. In both animes they try to show us the power of friendship and how it can change many different things. If you like seeing the main charachter develop and try to correct their mistakes .. until they reach their distiny .. you are to watch this one too.

similar style in art, MC's reminded me of the MC's in blue spring, amazing watch for both! honestly loved them both so much and deffinately reccomending both

What mostly captures the eye in these both anime is that art is similar and the two main couples of these anime looks somehow really similar. Also both of the main female characters where really friendly to others and where really attached to their friends. And the main male characters had some issues and something dark deep secrets inside their hearts. Both of the anime have nice dramatic feel which can make you really emotional.

The feeling between the impending tragedy of one of them is similar and as slowly developing romance between them.