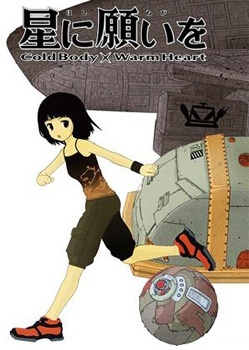 Lain is considerably darker than Hoshi, but both are fairly confusing titles that deal with cyberspace, and will likely appeal to the same fans.

Dennou Coil and Hoshi are great recs for each other, though Dennou is far longer and thus has a chance to be more in depth with the world. Each are lighthearted titles that explore cyberspace, and will likely appeal to the same fans.

Eighteen years ago, the sun's radiation caused new types of children to be born with special abilities. Amuri Kakyoin is one of these "Adapters" with a very unhelpful trait: her body physically repulses anything that approaches her. Lonely and solemn, Amuri has drifted through life in solitude; but one day, when the spaceship she is traveling on is destroyed, Amuri's luck finally changes; bouncing back and forth between space debris, she finally bounces into Uterus, a medical recovery capsule, where she is joined by a quiet girl and her robotic bunny. Alongside her new Adapter companions, Amuri will help defend the enemy in the skies with her new ability-amplifying suit.

Even though it makes zero sense, Hoshi is way WAY better than Amuri. Regardless, they reminded me of each other immediately. Both involve a girl who travels around in space, and there's little to no plot to be found. The main difference is that Hoshi's animation is fantastic. Consider it a strong rec if you've seen Amuri, and less so if you've seen Hoshi.

Consider this a gut feeling, but I think that fans of Summer Wars might like Hoshi and vice versa. While SW is far more outstanding and is overall a blockbuster of a title, compared to the confusing and short Hoshi, both explore cyberspace with delight and a touch of whimsy, with some dark moments thrown in for good measure. Hoshi's first episode with its exploration of the net was strikingly similar to the virtual world of Summer Wars, as well.

These two share similar settings and the overall, somewhat melancholic mood with characters roaming the vast (and hostile) cyberspace and discovering things about the old world and themselves. The themes of loneliness and bonding are prominently featured in both. Quite a few fights/action scenes in both too.

The story is set in the distant future when the world population has begun to shrink after reaching its peak. The "Supernatural Renovation Project" splits Tokyo with towering walls into several Cluster neighborhoods, each with its own unique genetically modified populations, governed by artificial intelligence. Most people live their lives in their own unique Clusters, blissfully unconcerned with life beyond. However, there are some who seek to escape to the other Clusters. An outfit helps those who wish to escape.

Shin Hazama has a version of himself who leads a different life in another Japan. One day, that other self appears. The battle with another world and another self begins.

Alice, the youngest person ever to be sent into space, is the only survivor when her flight crashes back to earth. Not only is she the only survivor, but she learns that she has been mysteriously catapulted 30 years to the future, where a mysterious dictator known as Nero rules the world with and iron fist and has sent his soldiers to capture, or kill her.