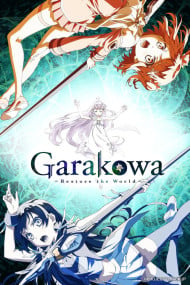 Tron stumbles into a bar and hooks up with Madoka Magica and Log Horizon.But wait! Digimon Movie 2 and Eva both show up and say that he is the baby daddy and all hell breaks loose... I believe a chair is thrown. Garakowa was a title I had the fortune to see, complete with a panel afterward of the director and producer. I was at Sakuracon, and saw that we had a rare opportunity to meet the makers at the end. This was an interesting notion, and seeing that I knew nothing of it, I was going in completely blind. First off, let me say it is not remarkable. It has a lot of flash and pizzazz, but the overall story was lacking depth to make it a full 3 act story. The story revolves around a trio of girls who, in the case of 2 of them, are anti-virus programs tasked with containment of infected software and deleting it. But more importantly they actually dive into worlds of human history/memories and embody people that world scan and detect infections. But instead of using a scalpel to remove the problem, they are written to compress all of the data for the world with the infection and delete it all. The 2 anti-virus programs go about their existence with little questioning, but one named Dual starts to show emotion for the deletions that she is forced to do. Her counterpart Dorothy does not understand why Dual shows these feelings. A third girls arrives, and her motivation, purpose and history is unclear. What is shown, is her inherent nature to explore and “figure” out humans and the how and why they are what they are. While exploring some of the collected Human memories and histories, she forms a bond with the other girls. But she has more to her than meets the eye, and this resolves as you find out more about her. What I liked? There is so many outfits that these girls wear, it could be a runway show. Every one of them are detailed and fit the era that the girls are in. There is a couple flashy action scenes that also look amazing. Also, some of the virtual “real” world is a finely detailed countryside Chatu set in an indiscriminate time period, on a large island. Somewhere in the circuit world are translucent shell looking spirals laying everywhere. I often was distracted by the version of computer world I was left with. The computer aspects of it were a tad bit of a draw if only for the fact that I work at a tech company in Washington. So when they are talking programs and upgrades I felt at home. And for the most part it was believable, but once in a while I believe they jumped into a show-knowledge of how a computer system works. Anyhow, it is Tron-ish and also similar in fashion to the great explanations given in Log Horizon. What I didn’t like. There is only so much time to develop our trio’s bonding, and it is supposedly set through 2 montage moments played to a couple of pop songs. One montage, I could understand, but 2 back to back felt like a lack of writing ability on the part of the show’s creators. Also there is no true third act. There is introductions, a couple of songs, then it dives right for the Evangelion/Madoka Magica/Megazone 23 /Ideon psychological twist ending. The only problem, I sort of figured out that twist, and then the talk of creation of the world was as jumbled as that last matrix movie. I guess I felt like they shot for the moon at the end, but laid little framework or answers to complete the saga. The music was subtle and fit the mood. If it is to be true, the director was asked directly the input he had on the music. He said in a movie format he had a lot of time to tell the music creator what he wanted. In a series a lot of the time, you have to ask for a “happy” song here, or a “sad” song there. But in this show he was able to devote more to the actual creation of the song-for-scene scenarios. Overall, I found the title to be fun, and passible. It was gorgeous for the most part, and does not take up a lot of time.

What I Liked: The wonderful, fantastical visuals and set designs. Great sound design. Soundtrack is (mostly) lovely, even if it is sparse for the most part. The character / monster designs were imaginative, and the pen staves were a nice touch. The story surrounding the OSs and humanity was interesting, if not a little old-hat. What I Didn't: The insert songs were both awful J-Pop nonsense, and detracted vastly from the general mood of the movie. The fact that the second act consisted of two inane montages back-to-back, including a poorly-done "characters shocked by devastated worlds" scene. Pacing is slow, and the plot flip-flops between frivolity and seriousness. Characterisation is mostly non-existent, especially in Dorothy and Dual's cases. Suffers from Final Act Mood Whiplash in a major way. Points off for using The Matrix's "humanity's a virus" idea. Final Verdict: Garakowa -Restore the World- might seem incredibly beautiful with its science fantasy visuals and (mostly) perfect soundtrack and sound design, but underneath all this hides a unfortunately lacking plot. The movie can't seem to decide whether to be a thought-provoking tale of humanity's reliance on technology or a collection of cute moe antics. Thanks to this, characters feel flat, events feel poorly paced and dramatic scenes have little to no impact. Ultimately, Garakowa is a film of great style but with a disappointing dearth of substance.

Wow... Just, wow!  Another review on this movie suggests that this is about humanity's reliance on technology however that's not what I got at all. This movie is a psychological and philosophicall look at what it means to be human.  To see the beautiful and dark sides of humanity. To see how the loss of someone you love can lead someone down a dark path.  I highly recommend this for those who like movies and show that deals with psychology and/or philosophy. 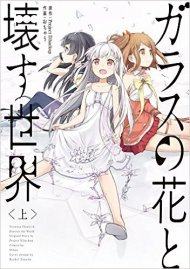