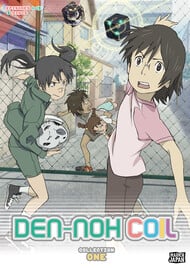 StoryThere is a lot that could be said about the sheer brilliance of Denno Coil’s setting. The series makes heavy use of “augmented reality” and presents a world where the line between the cyber-world and reality is blurred to the point of being indistinguishable. Anyone who has seen Serial Experiments Lain can tell you that this is far from new, but by having its characters use cyber-glasses for almost the entire show, Dennou Coil presents its world in a way that Lain (who had its characters plug in to a computer) could not. Dennou Coil’s “hackers” aren’t content to merely sit at a computer and type furiously; they literally throw their code at people, and dive for cover when they're attacked themselves. For the first few episodes, at least, the idea feels fresh and new. Sadly, Dennou Coil is far from perfect. Its biggest flaw, bar none, is an unhealthy fascination with the world it has created. In the episodes leading up to the ending, this is especially apparent. Characters drone on and on about their metatags and their obsolete spaces and their kirabugs and their cyberspace equipment and it's like something out of a Xerox manual. Annoyingly, the story is one of the biggest violations of the "show, don't tell" rule that I can think of in recent memory. Usually anime shows are guilty of not explaining enough, but here they explain and explain and explain until you wish they'd just shut up and talk about baseball or something. The standalone episodes that occur midway through the show are another annoying fault. After the writers set up the initial storyline and pique your interest, the show makes the bizarre choice of putting the main storyline on hold for about ten episodes. The standalone episodes aren't blatant filler, but the break in the narrative almost ruins the show by itself. As the novelty of Dennou’s world slowly wears off, ignoring the shallow characters, the uneven narrative and the overload of jargon becomes more and more difficult. By the time I hit episode 20, my interest had flagged to the point where I continued watching more to finish it than for actual entertainment. Despite being wonderfully creative and innovative at the beginning, Dennou Coil becomes downright tedious.AnimationThe character designs are all fairly unremarkable, and the down-to-earth backgrounds, while technically excellent in detail, don’t really stand out. Rather, the “virtual” parts added on by the cybernetic glasses are what make the animation shine. While they’re not exactly eye-candy, they’re innovative and cool enough to still make the animation a major strength of the show. A perfect example can be described as nothing other than what happens when a corrupt divx file starts artifacting (the first time, I literally thought something was wrong with my episode). The effect is used to show that something in the cyber world is glitching, and works wonderfully to remind us that the more fantastic visuals are actually images created by the glasses that the characters are wearing. Little touches like this make the cybernetic world feel like an immersive and cohesive mini-universe.SoundThere are a lot of children in the series, and consequently some of the voice actors suffer noticeably from Whiny Brat Syndrome. No one seiyuu is excessively obnoxious, but the voice-acting is bad enough to bring down the quality of the work as a whole. Music is unmemorable, but works fine at setting the mood for the show.CharactersUnfortunately, the anime focuses far too much on its setting and far too little on its characters. In essence, for a large majority of the show the characters are nothing more than tools used to talk about and interact with the anime's setting. Because of this, all of the characters (especially the mild-mannered protagonist) feel extremely shallow. While this problem is somewhat rectified by the ending, for the majority of the show you're forced to spend time with characters that you don't really know or like. As a result, Dennou Coil painfully illustrates an important point: world building, while nice, is no replacement for characterization. You can play chess on a pretty sparse board, but if you can't tell a pawn from a rook then you're out of luck.OverallIn spite of Dennou Coil’s numerous flaws, it's hard to completely dismiss the excellent premise. The beginning episodes (when the world is still fresh and hasn't been explained to death) are excellent, and while the standalone episodes do interrupt the flow of the story, some of them are clever enough to be entertaining in their own right. Throw in the nice ending and I might actually end up recommending the show to fans of cyberpunk. Still, this definitely isn't a show for everyone, and to me, at least, the flaws outweighed the strengths.

The problem with Denno Coil is that a handful of its episodes are great while the rest are dull as dishwater. Generally, I started an episode filled with dread about which it would be. Would it crawl through the meaningless misadventures of a side character in its blended world of virtual and objective reality, or would it deliver a brilliantly unnerving cyber battle full of disturbing imagery and heartrending loss? Its world is an admirably rich one full of eccentric detail and inventive plays on today’s world (look how they hold their hands to their ears like telephones as they communicate). But the show only ends up immersing itself in its quirkiness while leaving the viewer far behind. All the computer jargon feels appropriate but ultimately also hollow when I struggle to relate it to anything or understand why it matters - by the middle, I was pushing myself hard to complete the series and felt mainly relief when it was over. Denno Coil is thus all wonderful concept but uneven development and will mainly appeal to fans primarily in need of an immersive feeling rather than a thrilling plot. 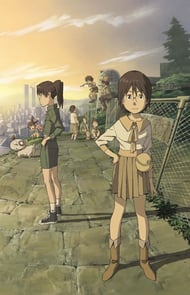 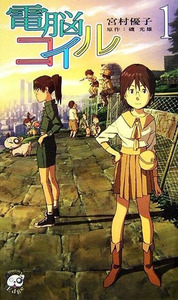 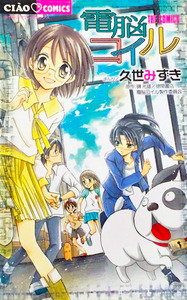