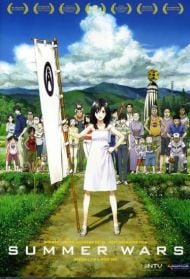 THE STAFF Recipe: Take one half standard slice of life comedy, and one half Digimon formula. Stir them in a bawl for ninety minutes and add a rather high budget for flavour. The result is Summer Wars.- Animated by Madhouse, the king of animated series. Ok, it’s not a series but they still did a great job with the material they had. - Directed by Hosoda Mamoru, who also did the first Digimon movies; so no wonder they feel so similar. SCRIPT We have a stereotypical spineless geek boy (blushes even by touching a girl), with a bad future career yet with a good heart. Duh, now what does that remind me of? Could this be some sort of wish-fulfiment romantic comedy? He is sort of forced to pretend being the lover and future husband of the prettiest girl of his school. Yup; it is. The reason she wants that is because she promised her one step before the grave grandmother to let her see the next heir of their proud, old fashioned house. And if that is not forced drama, I don’t know what it. Some misunderstandings, some ecchi, some erotic teasing and lots of secondary characters in the form of relatives doing their eccentric stuff. And then the story switches to the internet, where the dork’s virtual avatar is hijacked by an A.I. which plans to absorb cyberspace and bring a nuclear apocalypse. WOAH where did that come from? But worry not, since there seems to be a way to defeat it by playing videogames. You can start facepalming now. Ok, it’s a very far-fetched scenario full of plot conveniences and a cop-out solutions to everything but it’s not like the movie pretends to be serious. It’s silly fun and does it well. Doesn’t excel at script for the same reason of course. CAST The characters are all very lively but because of their large number and the short duration of the film, they don’t escape their stereotypes. There is a bit of character development for the major ones but if you happen to have seen a couple of school comedies, you know how it will turn out right away. And don’t do the mistake of thinking about their goals and motivation because they will only appear to be retards this way. Hell, what does nuking the whole world has to do with with an A.I. learning? Or how can you call legit a victory that is based on pure luck? Hm, whatever, the cast is colourful but nothing special or memorable. PRODUCTION VALUES The animation is of rather high budget as the characters have a wonderful lively body language and the 3D visuals used to represent the virtual world are indeed geeky detailed and very reminiscent of videogames. Each block of arena or message board is represented in an interesting way and Love Machine’s Hindu God appearance and battle style are plain awesome. Even the real world is presented fine in all its typical glory, with characters being drawn in plain outfits fitting their persona and a house mixing the traditional with the modern in decoration… inside a land-bound ship, in the green outskirts. You still can’t consider the whole thing to be Ghibli-level, as the animation is not that smooth in motion or rich in textures but the aesthetics are in the right place and can easily win the average viewer. Voice acting felt rather dry as although the actors tried to breathe life into their characters, they still don’t sound very professional. Maybe this applies just to the Japanese dub since it is basically a Korean production. Anyway, besides this minor glitch, the characters feel alive and interesting and the background music is somewhat epic in style with all that happens while the sound effects during the battles are pretty damn good. LEGACY A fine movie to spend n a joyful evening, without making you think of gasp too much. It is not a masterpiece in any way as the plot is far fetched and flows too convenient, while the characters are just colourful stereotypes without much room for development. Fun but eventually forgettable.

There are many reviews of Summer Wars, but as I don't agree with most of them, I thought I might just as well chip in and give my two cents - but I'll try to make it short. In my opinion, Summer Wars is fun to watch. And that's it. So I really don't understand all those overly enthusiastic reviews it got. Animation and sound are really good. But if you look at the story and characters, it's nothing special. I admit it's very well executed, with a good pacing, good visuals and bucketfuls of good feelings. So it does make a good watch. But that doesn't compensate for the lack of a captivating story or character development. Maybe my point is that I value highly character development, emotional involvement and thought-provoking themes. Summer Wars has none of that. It's just pure entertainment.  The story is about our high school student Kenji who is asked by his senpai Natsuki (the most popular girl in school) to help her during summer vacation. The "job" consists in Kenji pretending to be Natuski's fianceè in front of all her family during her grandmother's 90th birthday party. This storyline is then intertwined with the virtual reality one: Oz is a virtual social network (very much like Second Life) with a global expansion and very closely connected to the real world (it integrates the GPS systems, the bank systems, government and military authorities, businesses, trade, etc). So when a monster shows up on Oz and starts stealing people's accounts thanks to the cracking of the security code, chaos happens also in the real world. The storylines come together because Kenji and Natuski, helped by some other members of Natsuki's large family, take it upon them to fight this virtual monster and get things back under control. There's obviously more to it, but that's basically what the plot is about. Plot which isn't particularly original, nor are the implications of this excessive interweaving between virtual and real life explored in much detail. It's actually quite naive. MINOR SPOILER: in the end you'll see that the American military has a role in the unleashing of this virtual monster in Oz, but this isn't analysed at all - so why even mention it? As for the characters, the cast is large and for the most part likeable, most of it is made up of Natsuki's extended family. No one receives any in depth development. They all remain caricatures. Which isn't bad, I mean the portayal of the family relationships is very well managed, it's fun to watch them interact and listen to them squabble. They really do sound and feel like an authentic family, warm and loving. But they are all just cameos. Maybe the grandmother is the only one with a smidget more development and backstory.  So, while I don't care for all the virtual reality part of it (been there, done that) I do think the family part is well done. And the mixing of the two does create a nice contrast. It's basically a kids movie, fun and naive, but lacking the ability to emotionally involve you which makes kids movies lovely and touching also for adults. 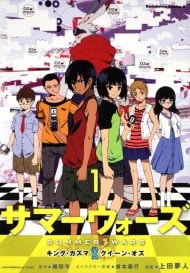 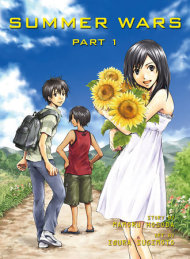 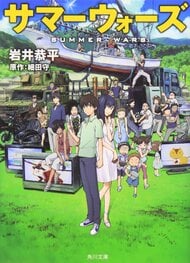