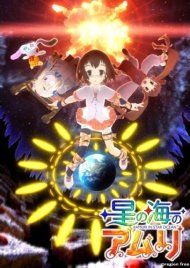 Eighteen years ago, the sun's radiation caused new types of children to be born with special abilities. Amuri Kakyoin is one of these "Adapters" with a very unhelpful trait: her body physically repulses anything that approaches her. Lonely and solemn, Amuri has drifted through life in solitude; but one day, when the spaceship she is traveling on is destroyed, Amuri's luck finally changes; bouncing back and forth between space debris, she finally bounces into Uterus, a medical recovery capsule, where she is joined by a quiet girl and her robotic bunny. Alongside her new Adapter companions, Amuri will help defend the enemy in the skies with her new ability-amplifying suit.

Woot! Neon glow lolis in space and the whole thing feels like 3D videogame cut scenes. Ok, this series definitely aims at otaku gamers and does a fine job giving you the proper feeling, so if you are a gamer, you will love the animation. But in case you are not… well, they will most likely see it as horseshit as everything looks so damn fake and stupid. The character costumes kick ass as they are full of neon glow, transforming robes, with a gazillion shifting details. And yes, it all ends up feeling like a sexual fetish with lots of sparkles, lasers, phosphoresce costumes and explosions. You get the schoolgirl, the elegant loli, the chiby fairy, the mini-skirt nurse and more… Did I mention the camera mascot bunnies? And they are all sparkling like Twilight vampires; it’s like watching a 3D eroge. People with photo-epilepsy or tendency to masturbate a lot should keep away or they will go blind. Oh, there are some male dudes too; but who gives a shit about those; this is a 100% horny-male-gamer oriented title. Too bad the body anatomy is rather simple and there is small facial variety. It is otherwise a fine parade of girls to droll over, as they transform, change costumes and fly in space. Backgrounds suck, as they lack details. Animation and attension to physics suck too, as the characters move like Lego toys. Chibi, with few body joints and crude movements. They clearly threw the whole budget into making cool sexy costumes while the spaceships were given a quick work on and were left at Beta version. Now about the sound… Oh, God, not those squeaky voices again! I have no idea what those ero-Japs find in them; they feel like nails scratching a blackboard no mater how cute they try to be. I also don’t care about the voice acting since those glass-shattering pinches were standing in the way. As for whatever dialogues I could comprehend, well, ok, they are quite cheesy. Everyone talks like a 5 year old in some fairy tale and all attempts at drama are simply coming down to lolis screaming in pain before starting to sing and using voice-activated special attacks. I tell you, it was a terrifying thing to tolerate if you don’t fancy the ero-Jap image of the squeaky-voiced loli.The songs are Jpop sang by some idol group or something. Ok, we all know what that means; cute girls singing about love and romance and shit in a series about lolis and neon glow fetish clothes. They aim at seducing you into an illusion, where you are the pedo-sultan in a loli-infested harem. You will NOT remember them. You will not pay attention to the lyrics either. You will be busy imagining other stuff… They are not bad. Just… not sporty either. I sure liked the midi tunes more to those, as they gave a closer feel of a videogame. The story is about… horseshit. Seriously, the premise is very interesting but gets horseshit in the first 5 minutes. Loli with superpowers, chased by middle-aged men who want to use her in some generic world domination plan and then becomes a team with more lolis and transforms into an almost butt naked, fluorescent being, full of lights and sparkles and stuff and fights in space. All of that in a duration of a normal movie. It is not simply not much to look for. It is also horseshit. The plot is almost like that of a fairy tale, full of convenient events and the power of love and singing to be the most ultimate force ever. Yet, it is not a fairy tale as it is full of lolis with squeaky voices, dressed in fetish clothes, being chased by middle aged men, bondaged, tortured and then singing and kicking the shit out of everyone. One moment they are coughing blood, the immediate next they level planets. Makes sense right? It sure does … in series like Dragonball Z. In reality, it is more of a wet dream than a story. And the characters are hardly given the time to develop in any other way other than just talking about themselves for 5 straight minutes. They remain quite generic and plastic, just like the dolls they all resemble being. There is no point getting into details of who they are or what they want. I will either spoil something or you will probably not even care about their personalities as much as their flat chests and funky neon-glow costumes. So, moving along…How much rewachability can a 3-episode series about lolis in space can possibly have? How about none? If you fancy this sort of stuff, go play an eroge or something; it lasts longer and shows a lot more. This series simply has nothing much to offer in terms of rewatchability or reason to remember anything else other than… you guessed it; lolis in space… in videogame mode!Frankly, I half-liked it; the whole videogame presentation was awesome but everything else pretty much sucks. The only thing I will bother to remember is lolis in transforming neon-glow costumes; all the rest were totally ignored by my brain. It is a mini series to kill some time before moving to the next videogame and nothing else.And now for some excused scorings. ART SECTION: 6/10 General Artwork 1/2 (generic) Character Figures 2/2 (cool) Backgrounds 1/2 (basic) Animation 0/2 (bad) Visual Effects 2/2 (cool) SOUND SECTION: 5/10 Voice Acting 1/3 (my ears!) Music Themes 2/4 (mediocre) Sound Effects 2/3 (ok I guess) STORY SECTION: 3/10 Premise 1/2 (typical) Pacing 1/2 (rushed) Complexity 0/2 (none) Plausibility 0/2 (none) Conclusion 1/2 (cheesy) CHARACTER SECTION: 4/10 Presence 2/2 (sexy) Personality 1/2 (cheesy) Backdrop 1/2 (generic and simplistic but it’s there) Development 0/2 (messy) Catharsis 0/2 (messy) VALUE SECTION: 2/10 Historical Value 0/3 (none) Rewatchability 0/3 (no reason to rewatch it) Memorability 2/4 (the videogame feeling was nice but other than that it’s meh) ENJOYMENT SECTION: 1/10 Art 1/1 (looks nice) Sound 0/2 (sounds meh) Story 0/3 (what story?) Characters 0/4 (I liked their clothes more than I did the characters) VERDICT: 3.5/10