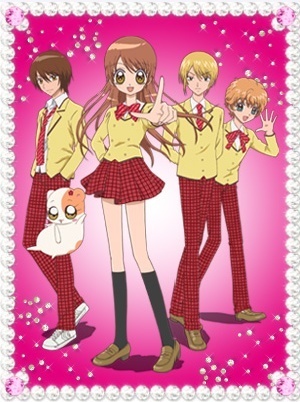 Gokujou!! Mecha Mote Iinchou and Peach Girl are series that are about reality based bullying in a school type of environment.  Each revolves around a main girl that is kind hearted and tries to help everyone around her out while at the same time having to deal with many misunderstandings about her characters along the way.

Gokujou!! Mecha Mote Iinchou and Kimi ni Todoke each have their fair share of bullying in them.  While the main girl that is kind hearted and tries to help everyone around her out while at the same time having to deal with many misunderstandings about her characters along the way.

Both anime have a shift between 2D, and 3D animation. Both anime feature shoujo-styled artwork. The main characters for Gokujou!! Mecha Motte Inchou and Kirarin Revolution have enormous eyes, long brunettte hair, and slim figures. Both heroines have huge eyes that cover over  half the length of their actual face. Therefore, the character art proportions are similar.

The theme songs for both anime feature the lead voice actress in the actual opening or ending theme. Kirarin Revolution, and Gokujou!! Mecha Mote Iinchou utilize Japanese pop themed songs with one main boy band, and a lead heroine.

Each episode has a unique plot with some romantic and comedic scenes.  Both anime run for more than the typical 26 episodes