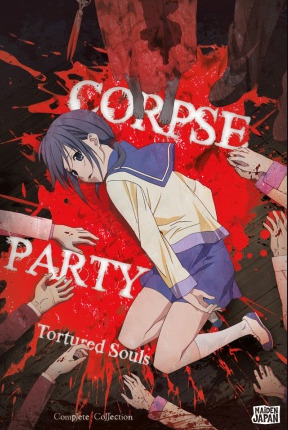 13-year-old orphan Meiri Chibana has just arrived at the Jiaiin Girls Dormitory, an orphanage and middle school where the students and staff treat each other like family, and only has two rules: at night, lock your door and don't leave your room; and don't enter the matron's room. But soon, Meiri discovers the horrific truth behind what's really going on at the orphanage...

Do you love seeing explicit gore, characters in hopeless situations, and don't care that the plot is a convoluted mess? If you answered yes to these questions, than you will probably enjoy Corpse Party/Dolls Fall.

Even though the situations and characters are quite different, they both have a very similar feel to them, and both do not hold back when it comes to gore and despair.

My grotesque (stalker), protects me from 100 stalkers in order to eat me. Sakurai Aoi, a high school boy, has a secret that he can tell no one. He's been a victim of stalking since childhood. One day Ueda Miyako, a classmate, suddenly turned into a monster. She was the one who was stalking Sakurai. The beautiful Miyako, who has been around Sakurai for a long time, was taken care of, but the monsters in urban legends all over Japan are stalking in order to love themselves. The fate of Sakurai, who is loved by the mysterious name of hundreds of beautiful women, is...

Years ago, Reina moved away from the remote village Hinamizawa with her family, but soon her mother became distant and ultimately left her father for another man. These actions caused Reina to have a breakdown, hurting herself and others in the process. After returning to Hinamizawa once more Reina – now known as Rena – hangs out with new friends such as Keiichi and others such as Mion and lives a good life, but soon she discovers that more is going on in her life and in the village than she imagined...

It's been almost a year since Natsumi and her family moved from the town of Onigafuchi. Her grandmother, a native of Hinamizawa village, fears that they will be cursed for abandoning the mountains, but Natsumi has never been happier, making new friends and enjoying school life. When a terrible gas explosion in Hinamizawa wipes out everyone in the village, her grandmother is convinced it is the wrath of the village god, Oyashiro-sama. Natsumi's family has never taken Grandmother's beliefs seriously, but her devotion to Oyashiro-sama has taken a frightening turn. Have the old woman's fanatical convictions gone too far?

Takashi is haunted at night by visions of a woman begging for her child not to be taken away. He sometimes sees strange shadows outside his window, but tries his best to simply ignore them. As his seventeenth birthday approaches, the shadow becomes more and more clear, and the vision more vivid. Slowly, the once kind and caring Takashi becomes indifferent, and eventually cold and biting towards everyone around him. What does this sudden change in attitude have to do with his seventeenth birthday?

Higurashi When They Cry: Oni

Taisho year 12 (1923). A tragedy occurring in Hinamizawa changes the fate of a lone girl and her friends. The turbulent early life of Oryou, head of the Sonozaki family, one of the Three Great Families, who would later be feared and known as Empress Sonozaki.

Higurashi When They Cry: Oniokoshi-hen

Wadanohara and the Great Blue Sea

The young witch Wadanohara has just returned from a journey across the oceans, searching for a clue to mysteriously lost memories. But now that she has come home, Wadanohara must begin a new quest to ensure the safety of the ocean kingdom she hails from, along with her familiars Memoca, Dolphi and Fukami. When a mysterious figure from her past appears and demands that she leave her ocean home forever, will it be enough to stop Wadanohara from upholding a family legacy to save her world from an invading force?