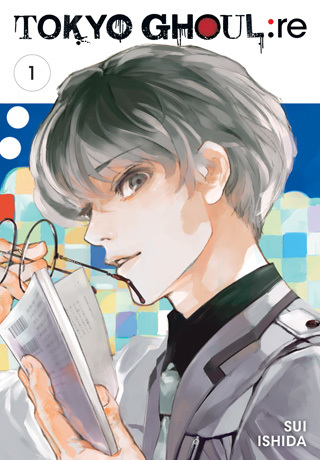 The following review is for the manga version of Tokyo Ghoul Re and may contain spoilers up to the final chapter 179.

The story skips ahead 2 years in a very abrupt fashion, which is jostling despite efforts to make it clear as to why. Characters like Ayato who previously didn't give a shit about other characters suddenly are getting along with them and are on their side. There is no explanation or buildup and it just feels like relationships were forced for plot convenience.

Tokyo Ghoul Re feels rushed. The author clearly wanted to be done with it, and it showed in their work. New characters would be constantly introduced only to die meaningless stupid deaths just as fast as they were put in. Paragraphs or more would be wasted on talking about these side characters lives and interactions when they had nothing to do with the main characters or story.

The main characters we all know, care about and love were hardly expanded upon and given any time to really grow. Even Kaneki, our protagonist feels like he got less time in the panels than random CCG expendables that no one cared or gave two shits about.

Kanekis relationship with Touka even, feels rushed and I get they were emotional and went through a lot of shit and deserved something good for once but they literally went from "havent seen ya in a while friend" to "HULK SMASH" with barely any time for their relationship to develop past friendship.

Kanekis relationship and life at the CCG was fake but I want to believe that he would care on some level for the friends and connections he made despite it being built on lies. He goes from being a mentor/fatherly-like figure to his quinque squad to being a complete asshole who doesn't give two shits if they roll over and die. It feels so cold, and Kaneki should be after what he's been through, but he is always kind to his loved ones... So shouldn't these people count as that?

The representation of LGBT characters in the story are extremely problematic. Mainly Tooru Mutsuki and Kanae von Rosewald who are blatantly trans characters whom both identify as male. The way Ishida handles their characterization for shock value and completely disrespects their identities ruined Tokyo Ghoul Re for me more than anything else did.

Mutsuki's identity is treated as the outcome from his childhood abuse and insanity, as if saying he is trans because he was abused and is trans because he's insane. It treats being trans as some perverted deception as if the characters are trying to trick people. Then the icing on the cake is when they find a guy whom they like, and suddenly they want to be "womanly" again.

When I found out they were trans I was so excited to finally see a story I love with them represented properly. Alas it was for naught. The vast difference between american and Japanese culture explains why anime and manga authors often portray LGBT characters incorrectly, but it is still not a justifyable excuse. We live in a time where if you do have minorities in your story you are expected to handle them with respect and care, knowing the lense you give them will influence on how people think of these minorities in the real world.

Then there was the finale. It quickly goes from ghouls vs humans, to ghouls and humans vs clown ghouls, to ghouls and humans vs weird ass entities and shit. Then Kaneki is sort of dying but hey lets skip the whole fight scene and ending entirely to explain 95% of the lives of random useless CCG extras that no one gives a fuck about in the final chapter. Where is this hyped up finale? Yes Kaneki got his happy ending he deserved but my god I expected more out of this.

This is Bleach all over again, and my heart breaks at that. I love Tokyo Ghoul but I'm going to choose to ignore Re simply because its a huge disappointment and problematic for so many reasons. I would not bother with reading or watching it.

Amending Review - Wrote this many chapters ago.

Okay... anyone who comes into this manga with expectations from it's prequel. Throw them out now. You will most likely be disappointed unless drastic changes happen after the past 52 chapters I have read. If so I will update this but for now this is how it stands.

Tokyo Ghoul:RE is for the younger crowd. I would liken it to how people who sold out sound different in the music business. Tokyo Ghoul:Re so far caters to a much younger imature crowd. That is not to say you cannot find something to like in it if you are a old fan or that fans from the original work could not enjoy this one even as a whole. However, to me... it has not come close to living up to it's true potential.

The beginning makes sense. I liked it for the first little while but then it devolves further and further. Adding new characters so that they can kill them off without touching the main cast. That is one of the major issues I have with it. In Tokyo Ghoul it felt like anything could happen. In Tokyo Ghoul:RE it feels like if they are willing to sacrifice anything of worth it will not be until the very end.

The other major gripe I have is in the deaths themselves. It is completely rediculous for a human to live through having a chainsaw imbedded in his head even for a short amount of time. Tokyo Ghoul never did anything so stupid. Proving this was not just a stupid fluke they have another investigator survive a see through hole in her gut long enough to speak with others and attack the enemy. In the original manga the investigators deaths were not like this. They actually felt real, not stupid.

The smaller gripes I have are the characters. While there are a few decent new ones. There are many completely unrelateable dumb weird characters. Like the investigator who survives the Chainsaw in the head for a little bit. He reminds me of a character from Nightmare before Christmas. I mean his face is weird. It looks like the mangaka gave a 5 year old a chance to come up with a character. As far as pointless characters we have gained and lost a bunch as I said they were created in order to be destroyed so that they could leave the main characters intact.

This manga has really gone downhill in the sequel. I mean... really badly. However, that is again my opinion based on how I liked the prequel. If you are someone who is into mainstream manga like Attack on Titan and Bleach I am sure you would still find this manga edgy and good. For me though... it has been one big disappointment so far.

So tokyo ghoul:re begins with a time skip and a new Ken, or as everybody else calls him now, Haise Sasaki. Ken has amnesia, which must be in the hat of japanese hot ideas for plots because amnesia is one of their favorite themes. After awhile its just annoying.

Anywhoooo after establishings connections with this new group of characters and a new basis of importance so that the reader feels something for the new gang, Ken does eventually get his memories back. The whole Ken/Hasai thing was similar to the Ken/Rize mind conversations and it was pretty enjoyable reading those  interactions.

The overall arching story was good but the overall impact and tension that we experience in tokyo ghoul is a bit more lacking. I will say the whole Arima thing was pretty darn good in this series. That was beautiful and sad in my opinion.

Touka X Ken by the way

One thing I didnt like was that the transitions between chapters weren't always the clearest or easy to understand and the art style is kinda sloppy in my opinion. Good, but sloppy. Also the ending felt rushed a bit so that was like an eh kind of deal there.

But like I said the overall story was good and I definitely enjoyed reading it. The characters and their depth and how they interact and clash really give this story its girth and ability to stand among other great titles. So I can recommend this but just know that if Tokyo Ghoul really blew your mind that this probably won't do the same thing to such an extent XD

The art was absolutely stunning. That's honestly all I can say. I would say the series was worth reading for the art alone.

There were a lot of unnecessary side characters, especially near the end. I would say of the characters that I can remember, most of them were likable though.

Urie had the best character development in ;re. He went from being this asshole who didn't care about anything but getting stronger to a guy who protected the people close to him (because he realized that they were the ones who made him strong.)

And then there was Tooru. His character was interesting but none of that is really important because he was just such an unlikable guy. I'm going to say it; he is crazy and self-centered and I hate him.

I found myself liking Touka a lot more in this series than the prequel. Although you can still see her bad-tempered sometimes she has matured a lot.

The biggest problem I have with this manga is definitely the storyline. Ngl I was really looking forward to Tokyo Ghoul:re because I loved the original Tokyo ghoul with all my soul. I feel like the story started nicely enough. Haise was really sweet and I really enjoyed seeing Haise's relationship with the rest of the Qs. It was nice to see a story from the side of the doves since they were the enemies of the ghouls in the first series.

However, after Haise regained his memories the story just went downhill. Everything after that just felt kinda half assed. Suddenly the author introduced a new group of unnecessary characters that has zero character development in the rest of the story only to have them be killed off. I don't even know their names much less their faces. And there was also V.  I still have no idea wtf V is nor its purpose. All I was able to figure out was...they have black suits and they don't like anybody else.

The last few chapters felt very rushed and I was kinda confused about what was happening half the time.

Overall I would say that Tokyo Ghoul re was a mediocre read. The story started nicely but the ending was rushed and confusing. The art was go-tier though so I guess that doesn't matter lol.

Heard there was a sex scene at about chapter 120, I read up to it, then dropped it. The action was pretty good, can't say much about the characters or the story since I didn't read about 50% of what was on the panels (there was wayyy too much text on screen at many points). The sex scene was more about the idea of these two characters finaly getting some romance than the sex itself so it was pretty wholesome. Don't read it though, it's fucking Tokyo Ghoul at the end of the day.