Katayoku no Khronos Gear: The promise of engage 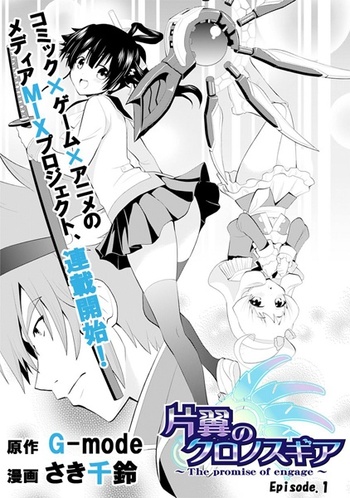 If you're looking for anime similar to Katayoku no Khronos Gear: The promise of engage, you might like these titles.

Though Goku gave up being a cop to become a detective, his sense of loyalty never faded. Thus, when someone starts killing his former colleagues, he has to get involved. The job might be more than he can handle, however, as he's up against not only a half woman/half motorcycle cyborg, but also the creator of the strange eyes that have been driving his friends to destruction! Death seems likely, but the tables may turn once a mysterious benefactor implants a computer in his left eye -- a computer that can obtain any information, control any device, even destroy the world!

When Kyohei moves to Tokyo, he thinks he’s left his old life behind. But when he discovers a bloody corpse, he also discovers that the past isn’t easily left behind, especially when the past is as unusual as Kyohei’s. You see, back in his home town, Kyohei was a “seki,”an individual able to control “kakashi,” ancient wooden “gods” capable of incredible feats, with his mind. Now there’s a kakashi loose in Tokyo, and it just may be up to Kyohei to stop it AND its seki in Kamisama Dolls!

Protagonist Gunzo Chihaya and his friends, with the help of renegade Fog A.Is, head towards the United States to present blueprints for a weapon that will turn the tides of war in humanity's favour. It is easier said than done because Gunzo and the rest of Arpeggio's crew have gotten the attention of the mysterious Admirality Code. Now they must face a new Fleet of Fog threat known as “Fog Student Council,” who are mental models dressed like high school girls. The Fog Student Council preaches that Earth's morals must correspond to the Fog's morals.

Akira Natsume seems to almost have a phobia of electrical devices while also being very good at diagnosing them. He resolves to change himself for the better and get a girlfriend like his older brother did. ...But then Akira suddenly dies in an accident. 16 years later a special policewoman and her android partner retrieve and activate a highly advanced AI and superweapon called EX-ARM and put it into full control of their ship as a last resort. Turns out the AI is actually just Akira's brain!