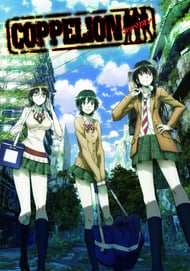 In the year 2016, a catastrophic incident at the Odaiba nuclear power plant contaminated the city with radiation and turned Tokyo into a ghost town devoid of life. 20 years later, Japan still struggles with the environmental consequences of that fateful day, and actively looks for survivors using Coppelions: genetically-engineered, radiation-resistant girls who scour the streets when SOS calls occur. With military support and funding to back them up, these young ladies continue to explore Tokyo and discover just who, and what, managed to survive.

Simply put, Coppelion is boring. It's definitely not a keeper, and not something I would ever watch again.The story is too simple. Three girls who have been genetically enhanced to be immune to radiation are sent to the ruins of a radiated Tokyo in search for survivors. They spend most episodes rescuing survivors and fighting some hostile ones. That’s all there is to it. The story lacks a hook. The cliffhangers didn't leave me in any suspense. After a couple of episodes, I didn’t feel much immersed in the anime, or care much for the characters. After half the episodes were over, I was so bored with the anime that I almost dropped it. But I decided to push through and finish anyway. The story doesn’t change at all. The worst thing about the anime is the characters. The three main females are boring, one-sided, and very melodramatic. They cry many times throughout the anime for all kinds of reasons. Despite being trained by the government, the girls seem poorly disciplined and ill-prepared. They constantly let their emotions get in the way. They even wear regular school uniforms, like they’re out on a field trip. The only supplies they have are stocked in backpacks, which include a “magic” Geiger counter which clicks whenever human survivors are nearby. Ibara acts as the selfless and brave leader. She is a bit too good at everything she does, so she often comes across a bit like a Mary-Sue. She is only one in the team who is useful. Aoi is pretty useless and spends most of her time either whining or getting herself into trouble. She spends several episodes inside a room by herself, thinking about how useless she is. Taeko doesn’t get to do much either, as she spends a lot of time resting and recovering after getting shot. She then spends a few episodes tending to a pregnant woman. Neither Taeko nor Aoi is of any use to Ibara. She constantly has to order them around. Without her, they don’t know what to do. You might roll your eyes and groan at them a lot.The villains are pretty boring. They want to radiate the entire world for stupid reasons. They are rarely a threat to the protagonists. The show even includes a stupid cliché with the protagonists trying to save the villains’ lives despite them trying to murder them all the time. And then the villains suddenly become good and decide to join the protagonists. It’s so cheesy.The art and animations are nothing special. Most of the scenes consist of city ruins and overgrown vegetation. 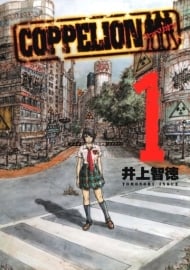 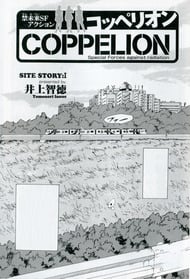