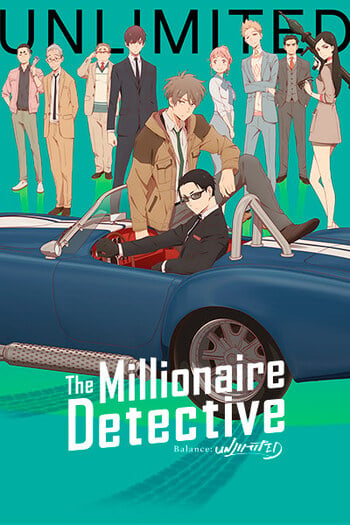 In this future, advertisements have infiltrated fashion, and young people earn lucrative amounts of money by becoming affiliates. As affiliates, people wear devices attached to clothing that advertise products. However, crimes related to this advertising trend have increased. Law, a persona program, has teamed up with Reisen, a former ad agency employee,  to investigate these crimes. An odd-couple team, Law and Reisen dive into a hi-tech world of commercialism and…murder?

Tells the story of four friends at a girl's high school in Fukushima Prefecture that is feared to have been radioactively contaminated. One of the four committed suicide a month after her college student fiancee told her that he was afraid of having a child with her because he did not want an unhealthy child. The story will deal with subjects such as the fear of radiation and the guilt felt by inhabitants who took refuge in other prefectures.

After Juri's third suicide attempt, only her aunt Monica cares enough to help her. Monica is a nun who regularly visits convicts and, believing that Juri will provide some insight on these emotionally destitute men, invites her to come along. One such prisoner is Yuu, who is on death row for murder, but has refused all visitors because of the hypocrisy he sees in the religious and other self-proclaimed do-gooders. When the two meet, they realize they have lived through similar turmoil, and agree to reconvene weekly to try to make sense of their lives.

Fall from a building, fall in love. Shinji was a high school guy without a future. He went up to the roof of a building with plans to jump, only to run into his beautiful teacher, Yaegashi-sensei! Then she made a shocking proposal that would change Shinji's destiny... An exuberant tale of double suicide from the pen of a genius!!

True love isn't something you awaken to... but something closer to a nightmare...