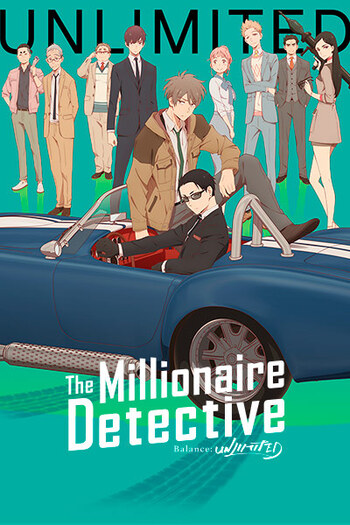 The voice acting and sound are amazing, you wouldnt even know this was the v.a. of Daisuke's first role. The op and ed songs are incredible. The animation is great especially when HUESC is involved. The characters, I don't get bored watching them do their thing.The duo are like the total opposites so at first they repel one another and later on they learn to accept those differences but not without some clashing since they are fundamentally different, they just have to meet half way. As for the story at first you'll go wtf with how absurd things are with the introduction of the rich detective aka Kambe Daisuke but at some point it goes full dive to some real shit. Like, the difference in episodes 3, 4 and 5 iteself says it all.

Also the op have some subtle changes throughout the episodes.

Overall this is a fun watch, even for people who would normally not watch this kind of genre.

I'm sorry but, what the hell? The guys that thought up this show collectivly smoked too much crack while wishing to be rich. The animations and soundtrack for this anime were really good, but thats basicly where my prasie ends. The plot is ok, until all the problems get solved dus ex machina style by money where it just pisses me off. Haru is to idealistic and self-righeous to enjoy after like the first episode and 'that rich asshole' is just a troll. Honestly didn't seem to have any personatily aside from being wealthy, maybe i'm being to harsh and he gets an emotional backstory in the lator episodes or something. I dont know, and i'm not sticking around long enough to find out. I really wanted to like this, i'm dissapionted that it missed the mark so bad.

This anime is my current favorite and even though it's still not finished I already like it so much. The flow of the story is just great and also I love the voices behind them, the animation was great and all the characters fit their roles perfectly and the mystery that the story is going on around with is just awesome. I can't wait to solve the mystery with Haru and Daisuke

This show has been so entertaining involving the journey of two polar opposites - a stone face millionaire taking revenge on his mother's death and a smart cheeky loud mouth who is a ordinary bloke. Both of which partner up to be badass detectives. I found this anime really difficult to distinguish if it's the anime of the year or if its a bit of downer. However I gotta be honest here, 11 friggin episodes doesn't do justice(see what I did there ;D) to make up a great story like I felt the ending was rather too rushed and tbh, the damn other cops working for Haru and Daisuke (except for Cho-San and Takei) are so friggin annoying. Plus they are just literally dumb and useless man! I mean yeah, have a tiny sprinkle of comedy but the jokes they crack open, don't crack open enough.

But that doesn't stop me giving this a chance for season 2 and loving the theme songs in this (honestly love the op and the closing). If you're into the buddy cop genre, go watch this anime folks!

I loved every single bit of this anime!!! I totally recommend you watch it!