Our love has always been 10 centimeters apart. 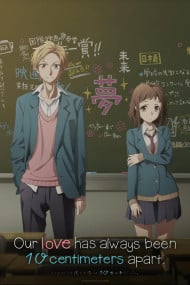 Under the cherry blossom tree at Sakuragaoka High School’s Entrance Ceremony, Miou Aida meets Haruki Serizawa for the first time. Ever since that day, their eyes chased after each other. Miou is reserved, while Haruki is very social. While many mistook them as a couple, their relationship remained a little more than friends. As they stop to sit on the steps of a deck on their walk home, Miou cannot help but ask, "Haruki...do you like anyone?" Haruki replies, "I do like someone ...what about you?" Just 10 centimeters between their hands. It’s just 10 centimeters, but the distance remains...

I'm never good at rating... Does it need a numerical rating if something was enjoyable? (So don't base your expectations on my numerical rating haha)Anyways, the anime was overall fun to watch because I was always ready for the next episode.  Story - If you've watched/read a lot of shoujo, you'll find it has a lot of the genre's elements. The story is told very concisely that it only needed 6 episodes. Though I do wish I could watch 6 more episodes haha. For anyone who doesn't know, this anime has a prequel I've Always Liked You and these belong to a series called Confession Executive Committee Love Series(wikia it!(am I allowed to mention wikia?)).  Animation - The art is pretty like the art in Confession Executive Committee Love Series' music videos. The animation itself is pretty good. No complaints here. Sound - The opening and ending songs are very bright and upbeat. It has the same vibe as the series other music videos.  Characters - The characters are cute. Their backstories make them a bit deep. However, I felt that the combination of their cuteness, deepness, personality, etc... didn't feel right. It bothered me bit for a couple of episodes. But after the "deep" part was over it was all good. The anime itself was good. If you delve deeper into the series, you may have a deeper or different perspective than me. Anyways, enjoy the anime. And don't take my numerical rating seriously.

One of the anime that came out in the fall season. The instance I saw this series I jumped right on it and I was not disappointed. But let's not waste time and get down to business! Story- Our love has always been 10 centimeters apart is about the blooming teenage romance between Haruki and Miou. Over the course of the six episodes we see the two of them grow past personal obstacles in an attempt to close the last 10 centimeters between the two of them. Its nothing mindblowing but sometimes simplicity is the best route to storytelling. I recall people comparing it to Toradora and in some ways it is but there are differences between the number of characters and the length and budget between the two series themselves. Its rather interesting to see an anime made based on a music video, makes it feel short and sweet. Animation- Pretty well done for a romance anime, and my brother agrees with me on the fact that the characters were well design. Lay-duce really knows how to use it budget. Sound- The osts are nice and simple, not too overbearing and bring a nice pleasant atmosphere to the series. Characters- As I said before, both Haruki and Miou try to progress past their personal obstacles. SPOILERS For Haruki he has a bit of an identity crisis and for Miou its getting past blaming herself for the death of Haruki's brother. Before the two can enter a relationship they must conquer themselves. There are other characters who have their moments, but the story itself focuses the most on Haruki and Miou. Overall- I almost wonder if the anime could have been a bit longer, but maybe studio Lay-duce wasn't willing to risk itself doing that with all the other projects they have. Some people were complaining about the main characters seperating for seven years before reuniting at the end but to be honest it didn't really bother me. SPOILERS A lot of series have done it: Inu-yasha, Strawberry 100%, and also Toradora. At the end its the love that's worth the journey. This anime really helped me get over the disappointment of Juni Taisen, Welcome to the Ballroom, and King's Game. The ideal short and sweet teen school romance anime! 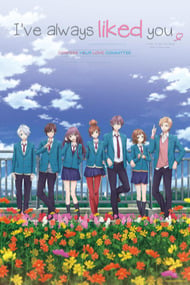